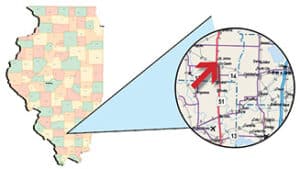 According to DNR’s fishing tournament data from last year, six tournaments at Du Quoin resulted in 240 largemouth bass being weighed-in. A handful of them topped the magic 5-pound mark, with the largest hitting the scales at 5.38 pounds.

But that’s not the latest news coming from Du Quoin. The lake was stocked with roughly 12,000 fingerling saugeyes earlier this year, setting up what could be an interesting fishery for years to come.

DNR notes that a fall electrofishing survey was the only tool used to evaluate the fishery. However, the sampling approach for this lake was overhauled during 2021.

“The electrofishing survey was moved to April and a fall netting survey (trap nets and gill nets) was implemented to collect data on species underrepresented during electrofishing surveys,” DNR noted in its most recent report on Du Quoin. “In addition, aggressive catfish stocking was implemented during 2020 and 2021 to bolster the population. More than 2,000 channel catfish were stocked in 2020, with an additional 6,000 stocked in 2021.

“Channel catfish stockings will continue on an annual basis as long as fish are available,” DNR stated.

Results of the 2021 surveys indicate quality fisheries continue to exist for bluegills, crappies and largemouth bass.

The redear sunfish fishery in particular is noteworthy.

Meanwhile, “the lake continues to harbor an overabundant gizzard shad population and is in need of additional piscvivores,” DNR explained.

Because of this need, DNR has slated annual saugeyes stockings, beginning with the stocking that took place this year.

As far as regulations, anglers should note the following limits currently in place at
Du Quoin City Lake:

DNR’s most recent surveys of the lake produced the following notes from fisheries biologists:

The bluegill fishery in Du Quoin City Lake is relatively good for a public lake. During the spring electrofishing survey, 214 Bluegill were collected, of which 23% were more than 7 inches. Many bluegills are just under 8 inches in length.

“Body condition appears to decrease rapidly once bluegills reach 8 inches in length,” DNR stated. “The abundance of gizzard shad in the lake is likely a limiting factor for bluegill growth.”

The redear fishery in
Du Quoin City Lake is excellent. Of the 55 Redear collected in the 2021 spring electrofishing survey, 27% were over 10 inches in length. The largest redear was over 11 inches long and weighed 1.1 pounds.

No channel catfish have ever been collected during electrofishing surveys at Du Quoin City Lake, although anglers have indicated that a low-density population exists. In response, DNR began stocking channel cats in 2020 as extra fish became available from the state hatchery.

“Experimental mesh gill nets were used during the 2021 fall netting survey to increase the likelihood of collecting channel catfish,” DNR noted. “A total of 36 channel catfish were collected in three overnight gill net sets. The largest catfish was 3.4 pounds, while the majority in the sample were under 2 pounds. The abundance of small catfish indicates that DNR stockings are having a positive impact and are increasing abundance as intended. Therefore, stockings will continue on an annual basis as long as extra fish are available from the state hatchery.”