Home » Minnesota » Passive, aggressive panfish and a big ’eye for a kid

Passive, aggressive panfish and a big ’eye for a kid 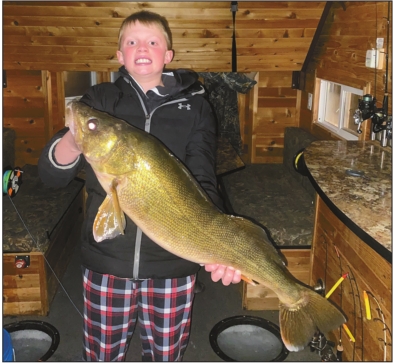 The hours I have logged watching my ice electronics probably numbers in the hundreds of thousands. During this time, I’ve gained a good idea about what I’m “seeing” in terms of different fish species.

When I first start ice fishing for panfish, I pull out my most aggressive spoon and work it frantically, hoping to call in fish from the general area. A jigging spoon with a “flapper” blade attached to the bottom of it will vibrate and get the attention of fish from far away. I snap that spoon and aggressively lift and drop it.

Here are some signs of what might be below you, as seen on your electronics.

Perch are notoriously slow and methodical, approaching baits timidly. Typical perch behavior is to slowly rise to the bait and then quickly depart to the bottom of the lake.

If there are larger perch in the area, it’s a whole different ballgame. We have plenty of lakes that feature “stunted” perch, and they behave the same way on just about every lake in the state.

What I like about crappies is that they don’t fool around. They strike!

Crappies sometimes approach a lure from beneath it, and the most aggressive crappies often come from the sides and magically appear on your screen.

Small bluegills are easy to catch and are vulnerable to just about any aggressive baits. It’s the larger bluegills that are the most frustrating.

When I see large, red marks on my screen and they approach my spoon and just hover without striking, I know I’ve got bluegills below me. This is when I switch to a small tungsten jig with a wax worm and try to entice the biters.

If you’ve ever watched big bluegills with a camera, they can approach a bait and suck it in the spit it out in a split second. Most of the time you don’t feel a thing.

Congratulations to Danny Kerzman, age 11, of Ottertail, who bagged his personal best walleye, a 12.5-pounder, on Battle Lake.

I was recently set up and ice fishing while doing my live outdoor segment on WCCO Radio when I had a visit from a conservation officer. How about that for timing!

The CO was a delight, and we had a nice conversation while I was on the air.