Forest Lake, Minn. — Longtime and accomplished DNR forest wildlife researcher Glenn
DelGiudice, of Forest Lake, died unexpectedly Dec. 23. He was 68 years
old. DNR officials say he was to retire in January. According to an
email from DNR leadership to agency colleagues, DelGiudice “had been
battling an infection and subsequent complications.” 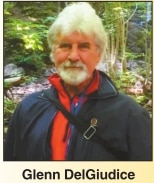 DelGiudice had worked for the DNR for more than 30 years, primarily as a
researcher with the Forest Wildlife Populations and Research Group.

He also was an adjunct professor in the University of Minnesota’s Department of Fisheries, Wildlife, and Conservation Biology.

According to his obituary, it was DelGiudice’s “kindness, strength, and warmth
that truly set him apart. He was known for his compassionate nature and
his ability to make those around him feel loved and supported.”

The obituary says a celebration of life is scheduled for Friday, Dec. 30,
from 4-7 p.m. at the Mattson Funeral Home in Forest Lake. In lieu of
flowers, his family asks that a donation be made in Glenn’s memory
toward a scholarship in his name, which will be established at a later
date.

St. Paul — For the first time, the Minnesota DNR’s Roundtable – an annual
gathering of conservation partners to discuss fisheries, wildlife, and
ecological and water resource topics – will include an open registration
opportunity for what historically has been an invitation-only event.

The 2023 DNR Roundtable is scheduled for Friday, Jan. 20. The opportunity
to register for one of a limited number of free, first-come,
first-served slots opened at noon on Wednesday, Dec. 28. The DNR’s
Roundtable page (mndnr.gov/roundtable) includes a registration link. The
theme of the 2023 Roundtable is “Minnesotans Working Together – The Key
to Conservation Success.” The keynote speaker will be Duluth Mayor
Emily Larson.

Prehn issued a press release on his decision.

“It has been my honor to serve as a member of the board since 2015.

I would like to thank Gov. Scott Walker for appointing me and the
Wisconsin State Senate for confirming my nomination years ago,” Prehn
wrote. “I have always said I will vacate my seat when the Senate
confirms my replacement or when I choose to do so. Unfortunately, it
took the Wisconsin Supreme Court to confirm my decision to stay on at
great expense for the taxpayer and an immense personal price. The
current administration ignored and continues to ignore this process in
many actions they have done over the last two years.

“Statues, which are laws developed by our elected officials, are the way our government should operate,” he wrote.

Prehn’s NRB term ended May 1, 2021, but he continued serving when the Wisconsin
Senate did not act on Evers’ nomination of Sandra Dee Naas, of Ashland, Wis.

Naas could begin serving Jan. 1, but would still need Senate confirmation. If she were
to not receive that endorsement, Naas would have to step down.

Bloomington, Minn. — Professional angler, educator, and multi-species fishing guide
John Hoyer will be the featured guest speaker at the Twin Cities
Walleyes Unlimited meeting Thursday, Jan. 5. Doors open at 6:30 p.m.,
and the event is open to the public.

Pierre, S.D. — The South Dakota Game, Fish and Parks Department reminds
resident hunters of unique opportunities that could exist later this
winter. The GF&P’s Wildlife Damage Management Program assists
landowners with wildlife depredation abatement programs and services.
When other methods are ineffective, GF&P may use hunters to help
reduce damage caused by wildlife.

South Dakota residents may register, free of charge, for potential
depredation hunts for deer, elk, antelope, and turkeys. Once registered,
hunters are put into a random drawing to determine eligibility once a
depredation hunt is authorized.

With the exception of hunters registering for elk, all other hunters are
encouraged to register for counties near their home or within close
driving distance. Hunters may register for a maximum of 10 counties for
any species other than elk.

Winter depredation hunts focus on assisting landowners with wildlife damage,
but also can provide hunters with another opportunity after traditional
hunting seasons are closed.

MN Daily Update: The rising cost of the … outdoors?