• Adams County Game Warden Taylor Knash reports that two individuals were charged when they dropped off an untagged 8-point buck at a butcher shop. After investigating, the buck was shot in Maryland, then transported to Pennsylvania. Also discovered during the investigation was that one individual also shot a buck last year and had no hunting license at the time.

• York County Game Warden Scott Brookens reports an individual shot two turkeys out of season while trespassing near Mount Wolf and fled the scene. A police officer happened to be in the area and attempted to stop him. The individual then got in a high-speed pursuit which the officer terminated due to the unsafe speeds. A short time later the suspect was arrested by another jurisdiction and turned over to the Pennsylvania Game Commission. The suspect is being charged with two misdemeanors for the turkeys and felony fleeing and eluding for the dangerous driving while fleeing.

• York County Game Warden Justin Ritter reports individuals have been charged for unlawfully taking antlered deer through the use of bait.

Subjects have been cited for big game tagging violations, loaded firearms in vehicles and boats. 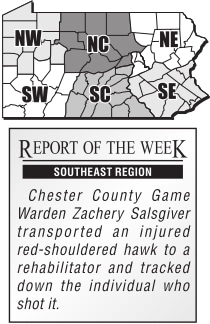 • Bradford County Game Warden Praveed Abraham is filing charges against an individual for shooting a deer from a road. He was able to catch the offender due to a concerned citizen who assisted in getting a license plate number for the offender’s vehicle.

• Luzerne County Game Warden David Van Solkema cited multiple individuals for not properly tagging a deer before moving it from the harvest location.

• Montour and Northumberland counties Game Warden Jared Turner reports that two individuals were cited for hunting over bait on the opening day of the firearms deer season in Milton at the St. Joseph’s Cemetery.

• Northumberland County Game Warden Michael Workman reports several individuals were cited or warned for failing to tag their deer before moving it from the place of killing.

• Sullivan County Game Warden Rick Finnegan reports that several cases have been investigated, including hunting bear through the use of bait, trespassing, unlawfully taken deer and tagging violations.

• Sullivan County Deputy Game Warden Garette Fallon reports that several individuals have been investigated and charged for hunting through the use of bait. One such individual was caught with a mineral block in his hands.

• Sullivan County Deputy Game Warden Garette Fallon and Game Warden Rick Finnegan investigated and seized an illegal bear that was shot by someone without a bear license, and subsequently tagged by multiple people, before being brought to a bear check station, where they were caught.

• Susquehanna County Game Warden Jonathan Bowman reports that multiple
individuals were charged on several different properties on the opening
day of the rifle deer season for hunting through the use of bait.

• Susquehanna County Game Warden Jonathan Bowman reports that two
individuals were arrested for fleeing and eluding, resisting arrest, and
many game law violations after an incident during the rifle deer
season.

• Berks County Game Warden Ryan L. Zawada reports the following
incidents: Zawada recently seized a large buck that was illegally taken
through the use of bait. He recently charged a Richmond Township man for
killing two deer and bringing them back to his home before tagging
them. He charged a Topton man who allowed his son to kill an antlered
deer – with a .17HMR – in the antlerless-only special firearms deer
season. He will be charging a Mohnton man for trespassing on private
property, possession of an unlawfully killed deer and littering on lands
open to hunting. He also reports conducting a total of 157 field checks
at Blue Marsh on the opening day of pheasant season. Those checks
detected 10 violations and led to the seizure of two pheasants.

• Berks County Game Warden William Vroman reports two separate incidents
during firearms deer season where a hunter had problems tracking a deer
he had shot. The first man shot a deer and never made any effort to
retrieve the deer after it ran onto another property. There is a wanton
waste law that spells out that hunters must make a reasonable effort to
retrieve any game they have shot. The hunter did not make any attempt to
contact the property owner of the adjoining property. That property
owner called the PGC because he did not want this deer to go to waste.
In the second incident, the hunter shot a deer, then trespassed on two private properties while
tracking the deer. He made no effort to contact the property owners
first. The hunter then attempted to dispatch the deer with an illegal
handgun while trespassing and in safety zones.

• Chester County Game Warden Matthew Johnson reports assisting Deputy
Game Warden Jeffrey Steen with charging two adult males for the unlawful
take of protected waterfowl on Marsh Creek State Park during the
opening day of the October duck season. The two subjects were observed
by Warden Steen shooting double-breasted cormorants, a non-game species,
while still under power of a boat with an electric motor. Many charges
were filed resulting in several hundred dollars in fines and costs for
each defendant, and license revocation may also result.

• Chester County Game Warden Zachary Salsgiver
reports transporting a red-shouldered hawk to a wildlife rehabilitator
for treatment, then tracking down the individual who shot it.

• Dauphin County Game Warden Russell Kreider reports an individual was charged with taking a 9-point buck out of season.

• Delaware County Game Warden Nicholas Visser reports that he and his deputies have noticed many fluorescent-orange violations.

• Lancaster County Game Warden Greg Graham reports that violations were
detected while checking goose and duck blinds at Middle Creek Wildlife
Management Area. Unplugged shotguns, unsigned Federal Duck Stamps, over
the limit of shells and attempted take of protected tundra swan
violations were handled with citations and warnings. Graham also
responded to an incident where a hunter experienced a mishap with his
treestand that resulted in the hunter hanging upside down for an hour.
With the aid of multiple extension ladders and fire company personnel
the individual was rescued.

Fortunately, his safety harness prevented any injuries that required a hospital stay.

• Lebanon County Game Warden Derek Spitler reports an Individual was
cited for hunting through the use of bait in Union Township. The
individual was hunting during firearms deer season with corn, grain and
mineral placed about 15 yards from his treestand.

• Lehigh and Northampton counties Game Warden Jesse Cunningham reports
citing a furtaker after he was caught trapping inside more than 20
safety zones without permission.

• Northampton County Game Warden Tyler Barnes reports citing multiple
individuals for not tagging their deer. All individuals have pleaded
guilty to these charges.

During questioning, he acknowledged knowing the property was posted, but
decided to hunt it anyway because he was denied access to the property
last year when he was unsuccessful in getting on the hunting lease.

• Schuylkill County Game Warden Charles T. Schuster reports that one
individual received a citation for hunting through the use of bait on
the opening day of firearms deer season.

• Schuylkill County Game Warden Charles Schuster said numerous
individuals were warned for failure to cut the back of their harvest
tags to show the date of harvest.

With five snowmobile fatalities already this winter in the state, here’s what you can do to be safe when you

Fish were left overnight in a hoop net and re-inspected the next day. During re-inspection, it was found that a

The world of science can move quickly, especially with new online publication outlets. Still, it takes time to think of