St. Paul — A long-running debate regarding timber harvest on state wildlife management areas – and its effects on the wildlife that reside therein – has been resolved via a five-action agreement between the state DNR and the U.S. Fish and Wildlife Service.

Level of satisfaction with the agreement’s action items, and if they’ll fully address concerns, varies by observer.

“The intent is that we won’t have to revisit this again,” DNR Commissioner Sarah Strommen said Monday.

The matter can be traced back to 2018 (or further, depending on
perspective) with adoption of a timber-harvest plan that included a
harvest goal of 870,000 cords of timber, annually, on state-managed
lands, including WMAs (the Sustainable Timber Harvest Initiative). Those
goals resulted in a letter from 28 area DNR Wildlife managers to agency
upper management in July 2019 that expressed concerns for WMA wildlife
species due to the timber-harvest goals.

“The current (timber) harvest targets for wildlife lands are too high to
maximize habitat value and ecological function for a diverse set of
species on WMAs,” the letter stated.

Also finding the STHI problematic was a group known as the WMA Stewardship
Network. Among that group’s concerns: that improper use of federal
funding – timber harvest on WMAs that wasn’t wildlife-focused – could
jeopardize future funding, millions of dollars annually via the Wildlife
Restoration Program, known also as Pittman-Robertson funding.

In March 2020, according to the WMASN, the USFWS began monitoring of
activities associated with P-R funding on three major WMAs in the state:
Whitewater, Mille Lacs, and Red Lake.

On Monday, Charlie Wooley, USFWS regional director based in the Twin
Cities, said the grant compliance monitoring at the three WMAs was
“standard operating procedure” for the agency.

However, a “field review” – feedback to the DNR post-monitoring – concluded with
the statement: “Last and most important, on WMAs, DNR must only cut
(timber) within the limits of the approved WMA plan. Reality will be
perception.”

In an Outdoor News interview more than a year ago, a USFWS official said the DNR must comply with recommendations from the report, or future funding could be in jeopardy.

Gary Drotts, a former DNR wildlife manager and a member of the WMASN, said
he was happy the matter was settled, but added that, “Still, the devil
is in the details” of the USFWS-DNR agreement. The five points, he said,
“are just the framework.”

And, Drotts added, he and the group aren’t pleased that the timber-harvest target remains in place on WMAs.

“The hard target is still the hard target,” he said. That, he said, crosses a line into “commercial” management on WMAs.

“There are wildlife-acquired lands that have a (Pittman-Robertson) nexus,” Drotts said. “These lands are a public trust asset.”

P-R funds are distributed by the federal government to states for wildlife
management. The funding is derived from taxes on guns, ammunition, and
other related gear.

Wooley acknowledged that the two agencies should’ve had conversations years
ago to address the points now contained in the joint agreement. He said
the federal funding – which includes a 75% federal reimbursement once
approved state projects are completed – comes with “a complexity we
don’t see in other programs.” 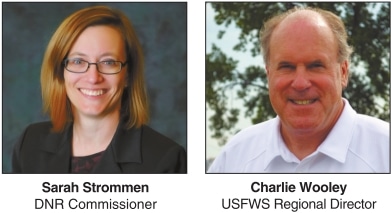 According to an email from Heather Kieweg, federal assistance coordinator for the
DNR’s Fish and Wildlife Division, “For federal fiscal year 2022, the
Minnesota DNR received $32,250,271 in Pittman-Robertson Wildlife
Restoration apportioned funds. These funds will be used to fund our
grants in the next few years. There is a lag between when an
apportionment is received and when the money is spent/reimbursed through
the grant program.

The DNR released a document Dec. 5 that outlined the five action items
agreed upon by the DNR and USFWS. Among them is training to be provided
to DNR staff by both DNR officials and the USFWS.

1) Deliver a leadership intent message to staff. Minnesota DNR
Commissioner Sarah Strommen and DNR Fish and Wildlife Director Dave
Olfelt will provide a written communication to DNR staff that reaffirms
agency direction and commitment to forest habitat management on WMAs and
(aquatic management areas) that is done to achieve fish and wildlife
species and habitat management goals and objectives for each unit. This
message will also reaffirm the DNR’s commitment to the requirements of
the Pittman-Robertson Wildlife Restoration and Dingell-Johnson Sport
Fish Restoration grant program and to unit-level planning.

2) Commitment to WMA and AMA plans. The DNR reaffirms its commitment to a
schedule for finishing master plans for “major unit” WMAs and to
developing a systematic framework for planning for the remaining WMAs.
These plans will incorporate interdisciplinary thought, public
engagement, and will describe how active habitat management, including
timber harvest, is used to achieve wildlife habitat management goals.

3) Clarify DNR roles and responsibilities. The DNR will finalize and implement its procedures
document that clarifies the roles Fish and Wildlife, Forestry, and
Ecological and Water Resources staff have in conducting forest habitat
management activities on WMAs.

4) Provide training. The DNR will provide training for Fish and Wildlife,
Forestry, and Ecological and Water Resources (division) staff to ensure
understanding of the DNR’s planning framework, forest management
policies and procedures, specific requirements that need to be followed
on WMAs and AMAs, and the requirements of the P-R Wildlife Restoration
and Dingell-Johnson Sport Fish Restoration grant program.

The WMA Stewardship Network sent a letter to the DNR after the agreement
had been announced. Among other points, the letter writers – Drotts,
Craig Sterle, and Greg Kvale – asked that the DNR go one step further
regarding WMAs.

The group suggests a greater emphasis on WMAs, which total 1.3 million acres in Minnesota.

Suggestions include a “commissioner-appointed WMA Stewardship Committee consisting
of various wildlife interests and recreational user groups.” The WMASN
also would like to see designation and funding of a WMA program within
the DNR’s Section of Wildlife. Also on the list, “an integrated WMA
planning effort” and “a thorough review of WMA system funding.”

Strommen acknowledged on Monday that WMAs largely have been left without plans
similar to DNR-managed state parks and large lakes, which have plans as
well as planning schedules. Several years ago, she added, the department
began looking at plans for WMAs, specifically larger units.

“Frankly,” she said, “we got behind on the commitment.”

Strommen said the DNR will continue in creating plans for the larger units, as
well as a more general plan for all WMAs. Discussion of such planning
will occur at this winter’s DNR annual roundtable event, she added.