Trout, smallmouths and a sense of Finger Lakes remoteness 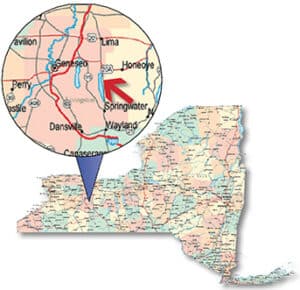 Blindfold anglers and put them in a boat in the middle of Canadice Lake and they might assume they were in the Adirondacks, perhaps on a lake loaded with colorful brook trout.

Canadice Lake, despite its undeveloped shoreline and scenic setting, is a mere 30 miles from the City of Rochester. The Ontario County gem offers some fine fishing – even ice fishing in most years – for both warm and coldwater species, notably lake trout and smallmouth bass.

And it doesn’t get a ton of fishing pressure, which is likely a product of boat (no longer than 17 feet) and horsepower (10 maximum) restrictions that keep many watercrafts off the 649-acre lake.

“It’s sort of a wilderness setting,” Austerman says, “with no development at all. There’s just the one state boat launch mid-lake on the east side.”

The main attraction for Canadice anglers is lake trout, which are available in good numbers and, occasionally, superb size. While DEC at one time stocked lake trout in Canadice, that practice was discontinued after biologists determined there was solid natural reproduction occurring.

“Everything we were sampling was coming up as wild,” Austerman said. “The wild fishery was pretty much supporting everything. And the numbers of lakers we were getting during our netting surveys were pretty high when compared to other Finger Lakes. We netted one over 18 pounds, which  was the biggest laker I’ve seen in the Finger Lakes, at least through our netting efforts.”

DEC’s 2020 angler diary program for Canadice Lake reaffirmed DEC’s lake trout management. While there were only five cooperating anglers submitting reports, the average length of those lakers was 22.1 inches, with several topping the 30-inch mark.

These days, DEC stocks only brown trout, about 5,000 yearlings annually. Austerman calls the browns “kind of a minor, secondary fishery to the lake trout. The browns are caught occasionally.”

DEC has also scrapped its rainbow stocking program; at one time the trout plantings were 50-50 on browns and ’bows. “We went to browns only and dropped the rainbow stockings about 10 years ago,” Austerman said. “The rainbows were just not producing well, probably because there are so many big lake trout in Canadice.”

Vertical jigging for the lake trout continues to soar in popularity, including through the ice, which is usually a possibility during the winter. “The safe ice usually arrives a little later than Honeoye and some of the smaller lakes, but most years we get at least a little ice fishing time,” Austerman says.

While the lakers are the main attraction at Canadice, smallmouth bass run a reasonably close second, with good numbers of bronzebacks. There are also largemouths as well, but the smallies outnumber the bucketmouths.

“There’s so much shore fishing available at Canadice and Hemlock you do see anglers catching largemouths, but overall the bass population is dominated by smallmouths,” said Austerman. “There are plenty of deep drop-offs and you can work those and cover a wide range of depths and usually figure out where they’re holding.”

Smelt are present in the lake and, in addition to adding to the forage base for the lakers, offer a popular fishery during the hard-water season.

Austerman says DEC is always looking for additional angler cooperators for not only Canadice but several other waters; you can become a cooperating angler by calling DEC’s Region 8 office at 585-226-2466 or email: fwfish8@dec.ny.gov.

Canadice Lake is managed under Finger Lakes regulations, with a 12-inch size minimum on bass and a regular season running from the third Saturday in June through March 15, at which time you can keep five fish daily. From March 16 to the Friday ahead of the regular-season opener, it’s catch-and-release, artificial lures only.

On the trout, the season is open year-round, with a minimum length of 15 inches and a daily limit of five “in combination,” with no more than one rainbow or three landlocked salmon (although there are no landlocks in Canadice).

The state launch is located on the east side of the lake near the intersection of Canadice and Birch Hill roads, but there are numerous informal pull-off areas for the shore fishing option or to even haul a small boat down to the water’s edge. There’s also a car-top launch at the south end of the lake.