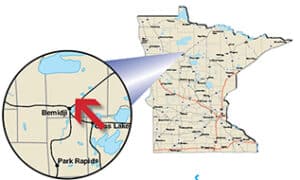 Whomever named Beltrami County’s Three Island Lake counted wrong. There actually are six islands on this 729-acre lake northeast of Bemidji. Just something to think about …

Regardless, Three Island is somewhat of a sleeper lake in an area loaded with excellent fishing opportunities. As swimmers of the Turtle River chain, Three Island’s panfish, walleyes, bass, and pike have the opportunity to move up and down the system, which bodes well for anglers who frequent Three Island.

It’s a bluegill and crappie fishery first, known for producing quality panfish within its abundance of healthy habitat in the way of vegetation to support them, both above and below the water’s surface.

“The whole lake has good (panfish) habitat. It’s full of submerged vegetation and plenty of bulrush/hard-bottom areas for spawning,” said Tony Standera, DNR fisheries specialist in Bemidji. “I just think Three Island gets overlooked because there are so many quality panfish lakes in this area.”

Bluegills have become even more prominent in recent years. Their size structure is impressive and they grow relatively fast, reaching 6 to 7 inches in length within five years of age.

Anglers should expect plenty of 8- and 9-inch bluegills, with the occasional 10-incher in the mix. There’s also a five-fish bluegill limit in place on Three Island, which could help ensure that the overall quality of its bluegills is sustained.

The lake also has a history of giving up nice crappies that tend to grow fast as well. Crappies in the 10- to 12-inch class are dominant, but fish up to 14 inches in length are caught from Three Island.

“People do well for both bluegills and crappies, and they are really nice fish,” said Carl Adams, of Timberline Sports in Blackduck. “The spring can be good in shallow water, and (crappies) load up in that deeper water on the west end during the fall and winter.”

The lake’s walleye population is currently down a bit from what were impressive numbers decades ago. Natural reproduction was historically good, and the opportunity for these fish to travel throughout the Turtle River chain seemed to maintain Three Island’s walleye population.

Until just recently, the lake hadn’t been stocked with walleyes since 1955 – it didn’t need to be. But the DNR started a regimen of stocking walleye fry in 2019 on an every-other-year basis with the intent to bolster numbers.

“There’s a history of good walleye fishing on Three Island, but we started hearing reports of declining success from (walleye) anglers,” Standera said. “We haven’t seen those young fish in recent surveys, and we’re hoping that stocking helps fill in those gaps.”

The DNR surveyed the lake this past August, and gill nets averaged just over three walleyes per lift, up from 2.75 per net in 2016 but below the target goal for Three Island, which is 41⁄2 per net.

“They also averaged almost 21⁄2 pounds this summer, so we’d like to have more young walleyes show up,” Standera added.

Since 2003, Three island – along with the entire Turtle River chain – has had a 24- to 36-inch protected slot in place for northern pike. The original intent was to improve their size structure, but recent surveys have not shown improvement. Pike numbers have gone up and size has actually gone down. Few pike over 30 inches were sampled this summer, and Standera said it’s likely the regulation will be tweaked.

Bass anglers can expect plenty of fish between 12 and 14 inches, with a few bigger in the mix, too. There isn’t much fishing competition for bass on Three Island, so you’ll have plenty of room to fish its acres of lily pads and submerged weeds.