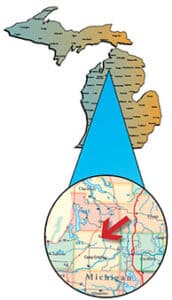 Michigan is blessed with abundant inland lake fishing opportunities for both warm-water species like panfish and bass, and cool-water species like trout. Some lakes, called two-story lakes, offer opportunities for both types of fish. Starvation Lake in northeastern Kalkaska County is one of the better two-story fishing lakes in the northern Lower Peninsula.

“Starvation Lake continues to be an excellent destination for anglers in pursuit of panfish, bass, and stocked trout,” wrote Michigan DNR fisheries biologist Mark Tonello in a summary of a 2018 survey of the fishery in Starvation Lake. “The 2018 MDNR fisheries survey of Starvation Lake found healthy populations of bluegill, rock bass, largemouth bass, and smallmouth bass, all of which were growing above the state average. Yellow perch are less successful in Starvation Lake and are lower in abundance and growing below the state average. Stocked brown trout and rainbow trout continue to grow well and hold over for multiple years, attaining trophy sizes over 20 inches. Angler reports for the stocked trout remain extremely positive.”

Starvation Lake is located in Blue Lake Township about seven miles southeast of the town of Mancelona. A relatively small lake, Starvation features 134 acres of surface water. It’s a long, narrow lakes with two basins. The northern basin drops down to a maximum depth of 47 feet while the southern basin bottoms out at 45 feet. Trout like to congregate in these deeper holes.

According to Tonello’s report, Starvation Lake lies within the Manistee River watershed and is self-contained with no inlets or outlets.

Most of the shoreline is privately owned except for a DNR public access site at the northeast end of the lake off Kerby Lane. The site features a hard-surface boat launch with one skid pier, a pit toilet, and parking for seven vehicles and trailers.

The bottom of Starvation Lake is primarily sand, with some of the deeper areas containing layered organic substrate.

There’s a high-speed boating restriction on the lake that includes a moratorium on high speed boating (including waterskiing and tubing) between the hours of 6:30 pm and 10 am the next day. That creates good fishing opportunities early in the mornings and later in the evenings.

Starvation Lake is classified as a Type C trout lake, which means it’s open year-round for trout fishing and has a minimum size limit of 8 inches for both rainbow and brown trout. The daily creel limit is five trout in combination, but only three can be 15 inches or longer.

Starvation Lake has a deep history of fishery management.

Fish stocking has occurred in Starvation Lake since 1936 and the first survey of the lake’s fishery was in the summer of 1943.

Warmwater species including bluegill, smallmouth bass and largemouth bass were stocked in Starvation Lake by the Michigan Department of Conservation from 1936 to 1943.

Rainbow trout were first stocked in the spring of 1944 and either rainbows, browns or both have been stocked in most years since.

In 1985, local anglers and property owners petitioned the DNR to start stocking rainbow trout in addition to browns. They cited poor survival and fishing for brown trout as the reason for their request. In response, both browns and rainbows have been stocked each year since. That effort includes 6,520 browns between 7 and 9 inches and 3,200 rainbows averaging 7.8 inches in 2020, along with 3,339 7-inch browns and 3,685 7-inch rainbows in 2019.

“Starvation Lake continues to be one of the premier inland trout fishing lakes in northern Michigan,” Tonello wrote. “This is entirely due to the MDNR stocking program. Unfortunately, Starvation Lake does not have the appropriate habitat to support natural reproduction of either rainbow trout or brown trout. Therefore, stocking should continue at rates of 25/acre (3,350 fish) on an annual basis for both species.”

In the 2018 survey of the fishery in Starvation Lake, 563 fish, representing nine different species were captured

Bluegill and yellow perch were the most abundant species collected. Bluegills were mostly large adults, averaging 8.6 inches in length. The Yellow perch were small, averaging less than 7 inches. Largemouth and smallmouth Bass were also found in good numbers, with multiple year classes of both species present. Largemouth bass ranged from 9 to 20 inches in length, and 81% were larger than 14 inches. Smallies ranged up to 19 inches, and 59% were larger than 14 inches. Good numbers of rock bass to 10 inches were also found.

Brown trout and rainbow trout were well-represented in the survey. A total of 54 browns were captured, which ranged from 4 to 23 inches in length Lighter numbers of rainbows were collected. They ranged from 7 to 19 inches.