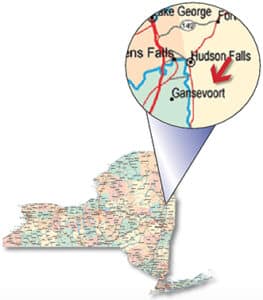 When winter finally settles into Washington County in eastern New York, not far from the Vermont border, one of the first major ice fishing lakes to button up is usually Cossayuna Lake in Argyle and Greenwich.

A huge bass fishing destination in the summer, Cossayuna – at nearly 4 miles long – has plenty of surface area for anglers to tackle (pun intended) any time of year, including through the ice.

Predator fish anglers are attracted to Cossayuna because of its northern pike. There’s also a healthy and recurring tiger muskie population, thanks to a liberal stocking program in a lake that New York State Department of Environmental Conservation regional fisheries staff say is perfectly suited for these toothy fish, which are a hybrid of northern pike and muskellunge.

“There’s an abundance of aquatic vegetation. There’s a lot of suitable habitat and it’s a prolific resource for panfish and baitfish,” Region 5 Senior Aquatic Biologist Jim Pinheiro said. “It’s a productive water and it can feed a lot of predators.”

“There’s a population of northern pike in there that’s holding its own, but the tiger muskies offset that,” Pinheiro added. “It’s pretty much the only species that the department propagates, and we reasonably stock in that water. It also provides a different opportunity.”

Pinheiro said DEC annually stocks “Cossy,” as it is known, with 3,900 tiger muskie fingerlings. He said every winter somebody sends him photos of trophy caliber tiger muskies caught from this lake. He also pointed out that nearby Carter’s Pond and Lake Lauderdale are also stocked with tigers.

As for bait for northerns and tigers, Pinheiro said “I hear of guys using large bait, usually suckers or whatever is available. That’s typical for those large predators, whether it’s tiger muskies or northerns.”

“They do really well on bluegills, pumpkinseed and perch,” he said. “It’s really a productive water, and they catch a lot of bluegills there.”

Cossayuna Lake is accessed primarily through a New York State boat launch on the lake’s northeastern corner, near Big Island.

Come summer, Cossayuna Lake will be on the radar of the bass fishing crowd. Not only do anglers come from all over to fish for both largemouth and smallmouth bass, but a number of local bass clubs regularly hold tournaments.

Pinheiro feels the lake’s habitat is as equally suitable to bass as it is for pike and tiger muskies.

“The fishery that is going to exist there is going to be dependent on the available habitat. That lake being as fertile and productive as it is, and having the extent of aquatic vegetation that it does, that makes it a very suitable black bass water,” he said.

“The fact that it does have some deeper water with rocky and gravelly drop-offs, makes it productive for smallmouth bass. But, being that the vast majority is so well-vegetated, and fairly shallow with a lot off edge cover in the deeper water – deeper than 10 feet – makes it suitable for largemouth bass and that ambush style predator such as tiger muskies,” he said. “The amount of cover in that water make it suitable for successful largemouth bass spawning. So not only do you have suitable cover along all of this vegetation, mostly in deep water for larger fish, but you also have a large portion of the lake as suitable nursery habitat for smaller bass and plenty of forage available within those aquatic vegetation beds for nursery habitat.”

To sum up Cossayuna’s bass fishing potential Pinheiro says “you’ve got this constant cycling of populations regardless of if there is significant predation from predators. That may not even be fish predators, it may be avian predator and fishing pressure. But, with the vast majority of anglers practice catch-and-release, there’s very little harvest targeting black bass.

There is a hard surface ramp boat launch with parking for 30 cars and trailers on the northeast end of the lake located off East Shore Road. This site is accessible for persons with disabilities.