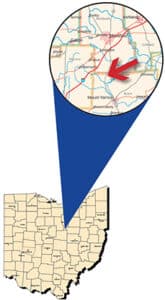 Fredericktown, Ohio — When anglers think about fishing public waters in Knox County, the discussion generally turns toward Knox Lake, well known as one of the best bass fisheries in central Ohio.

However, not much thought is given to Kokosing Lake, which is about five miles to the west.

The only real fishing pressure the smallish, 154-acre reservoir gets is from guests at the small campground and a handful of locals.

Kokosing is given to an unusual fact in that largemouth bass were actually stocked here at one time, in 1995, according to Division of Wildlife records. The reason was likely due to academics rather than recreation. Ohio State University for years used Kokosing Lake for research purposes.

Nevertheless, more than 10,000 fingerlings were stocked in that one year. That could explain the occasional bass that goes beyond 20 inches and catch rates that are above average for the state. Kokosing ranks right up there with Knox Lake and Hargus Lake, two of the better bass fisheries around.

“It is kind of one of our smaller, overlooked lakes,” said Nick Radabaugh, a fisheries biologist for the ODNR Division of Wildlife in central Ohio. “It’s been a while since we did a creel survey there, 2014. But, then the majority of the anglers were fishing for bass. It does have a nice population of 12- to 18-inch (bass). There are decent numbers of them that are 15 inches and above. No really, really big fish.”

Fishing shoreline cover in spring is productive. Kokosing features a 5-acre island on its south end that bass anglers target, particularly during the spring months.

“There’s definitely (bass) there to be caught,” he said. “ … You’re going to find crappies, largemouth bass, and channel cats there. Those are the three main species.”

Currently, channel catfish is the only species that is stocked. Catfish are stocked every other year with about 4,000 of the larger yearlings.

To catch them, try summer nights with shrimp or nightcrawlers fished on the bottom. Remember, the statewide daily bag limit of six is in effect with only one fish 28 inches or larger allowed. Anglers will catch the occassional bullhead here, as well.

For panfish, Kokosing has a decent population of crappies, almost exclusively of the black variety. Catch sizes will range from 7 to 10 inches. In April and May, fish for them along shoreline brush and fallen trees, of which there is a good amount here. A simple jig and skirt combination will work, or tip a jig with a minnow. Small spinnerbaits thrown into the brush will certainly produce some hangups, but also a few fish.

“The crappie population is pretty good, and probably overlooked as well,” Radabaugh said. “We get good growth rates there and decent numbers of fish over 9 inches.

There is no minimum size limit nor bag limit for crappies here, and there never has been one, according to Radabaugh.

“Recently, we’ve taken the 9-inch limit off of similar lakes because (the crappie population) tends to get stunted,” he said. “I think that’s kind of benefits Kokosing,” that there has not been a minimum.

The lake is not very deep at an average of 6.5 feet. It has a soft mud bottom. The deepest point, at the dam, likely runs about 10 feet.

“The best access is probably the south shore and around the dam,” Radabaugh said. “The lake is surrounded by wildlife area, but a lot of the north end is wooded and there’s not much access there. That’s kind of the shallower end of the lake, anyway. A lot of the best fishing areas are on the south side of the lake.”

For boating anglers, there is one primitive, two-lane boat launch on the south side of the lake at the picnic area. Boat motors are limited to 9.9 horsepower.

Much of the lake, particularly the north end, is shallow water.

“It’s just one of those flood control lakes that’s doing it’s job,” Radabaugh said. “And, in doing that, they just naturally silt in over time. It’s a slow process, but over time the lake gradually gets shallower.”

Locals say fishing for smallmouth bass in the headwaters of the Kokosing River wouldn’t be a waste of time, either. They say the river has been cleaned up in recent years and is now producing smallmouths up to 18 inches. You’ll also find rock bass and suckers in this section of the river.

Most of the stretch of the Kokosing River below the lake is navigable, and the Kokosing Water Trail picks up in Mount Vernon, about 18 river miles to the south. From there, anglers in small boats, kayaks, or canoes have another 27 miles of river extending south with plenty of access points as part of the state designated water trail.

Kokosing Lake is surrounded by the 1,113-acre Kokosing Wildlife Area. The dam, small campground, and day-use facilities are in the southwest corner of the area. There is also a 1.5-acre pond in the northeast corner of the area, and four acres of marsh that offers controlled waterfowl hunting in the fall. There’s also a bit of small game hunting, including released pheasants, in the fall at the wildlife area.

You can reach Kokosing Lake by traveling County Road 6 about two miles northwest of Fredericktown. The boat launch is also off County Road 6.