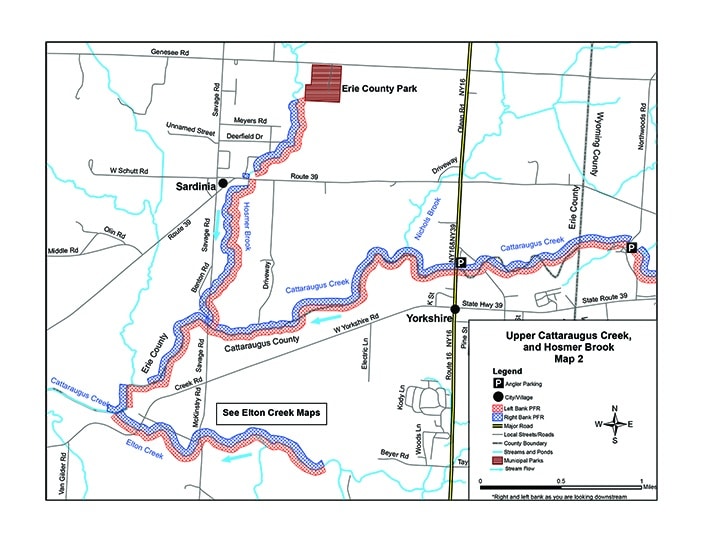 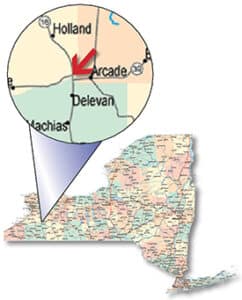 Upper Cattaraugus Creek sees plenty of fishing pressure, and like most waters in New York that draw some serious angling attraction, there’s usually a good reason.

In the case of the Upper Catt, there are actually two good reasons. Stocked trout. And wild trout.

Well, maybe three if you consider the abundant access, which is important in these crazy times to keep your distance from fellow anglers.

The Upper Cattaraugus Creek trout fishery is considered to extend from the Hake Road (also called Town Line Road) bridge between Elton Creek and Springville, upstream to its source at Java Lake. The lower stretches of the creek make up the border of Erie and Cattaraugus counties, and further upstream the creek flows into a portion of Wyoming County.

DEC stocks a pair of sections of the Upper Catt. A seven-mile-long stretch of the creek from Hake Road upstream to New York state Route 16 has an annual target stocking of 6,800 yearling brown trout as well as 950 2-year-old browns. The remaining 11-mile section from state Route 16 to a mile above East Arcade typically receives 5,400 yearling browns and 1,000 two-year-olds each spring.  (Note: Stocking numbers for yearling trout could be lower in 2020 due to the issues with zebra mussels at the Rome fish hatchery. Also, the normal three stocking increments were poised to be combined into one March stocking as hatchery staff hustle to get fish stocked quickly due to coronavirus concerns.)

While the stocked fish numbers alone make the Upper Catt a popular destination, the creek also supports a solid population of wild brown trout and rainbow trout. And even bigger numbers of wild trout reside in top-notch tributaries like Hosmer Brook, Clear Creek Elton Creek and Lime Lake Outlet. Most of the wild rainbows are found downstream of Clear Creek.

Hosmer Brook is not stocked, but offers some solid fishing for wild browns and ’bows. In fact, past DEC surveys have shown an estimated 700 trout per mile. Hosmer Brook has 1.6 miles of public fishing rights.

Spring Brook also has wild brown and rainbow trout, as well as some wild brook trout. Spring Brook has 0.8 miles of public fishing access along its route. And DEC surveys showed high concentrations of wild trout in Lime Lake Outlet (1,150 per mile) and Clear Creek (823 per mile).

Cornett says the Upper Catt, especially the section upstream from the mouth of Elton Creek, provides good fishing all through the spring and summer.  “Even in hot summer weather when afternoon water temperatures may reach into the mid- to upper 70s, there are enough thermal refuge areas for trout to hunker down and survive the day, with water temperatures dropping back into the low 60s overnight,” he said. “During warmer weather anglers should limit their efforts to early morning hours.”

The Upper Catt is capable, too, of yielding some surprises in the form of big brown trout, notably in the fall for anglers who target the big browns with stickbait lures and streamer flies.​ “In our electrofishing, at one of our survey sites we captured the same 21-inch wild brown trout from the same pool two years in a row,” Cornett said. “One of those years we also had another 22-inch fish in the same site.  We also get reliable reports of 14- to 17-inch wild rainbows, mainly from the section downstream of Route 16.”

Cornett says DEC is conducting a year-long angler survey on the Upper Catt, along with several tribs, so anglers may encounter a survey agent between now and late August.

Upper Cattaraugus Creek offers plenty of access, since it’s bisected by roads such as Route 16/39 north of Yorkshire and paralleled by others, such as East Arcade Road, Route 98 and West Yorkshire Road.