Lake Besser, also called the Ninth Street Pond, is an impoundment on the lower end of the Thunder Bay River at the town of Alpena in Alpena County.

Like most impoundments, Lake Besser features a mixed bag of game fish including both predators and panfish, along with an abundance of rough fish. Fishing action is often robust, although you won’t always find the game fish you’re targeting on the end of your line when you reel it in.

Lake Besser consistently produces mixed bags of northern pike, largemouth and smallmouth bass, muskies, and walleyes along with a variety of panfish. 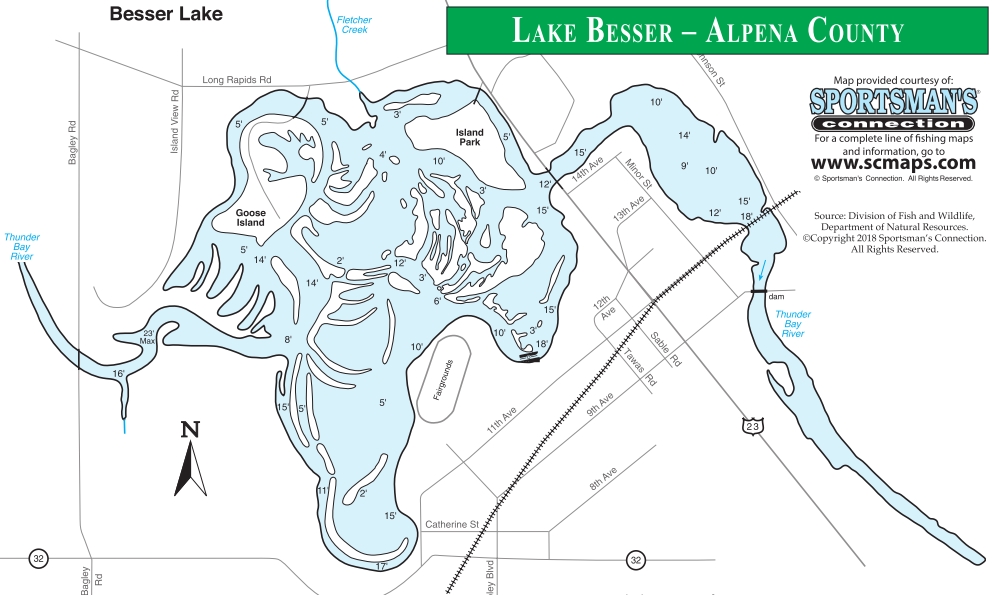 In a summary of the most recent survey of the fishery in Lake Bresser, Senior Fisheries Biologist Tim Cwalinski wrote, that the lake has, “a diverse panfish community demonstrating average growth and dominated by pumpkinseed sunfish and rock bass; a diverse game fish predator population dominated by northern pike, largemouth bass, and walleyes, none of which are considered abundant; an acceptable walleye population that is likely built from upstream stocking efforts and with fish able to reach older ages; a low level muskellunge population that is currently being rebuilt through stocking efforts; and a prolific non-game fish community composed of bullheads, bowfin, common carp, and suckers.”

Lake Besser covers 366 acres of surface water. The impounded stretch from
Highway 23 downstream to the dam covers 59 acres while the portion
upstream from Highway 23 covers 307 acres.

Below the dam on Lake Besser is about 1.7 miles of the Thunder Bay River
before it drains into Lake Huron. Salmon, trout, and other game fish
migrate up the river to the dam and create exciting fishing
opportunities, especially in the fall.

Lake Besser is relatively shallow with a maximum depth of just 23 feet where
the Thunder Bay River enters the lake. Most of the water is less than
10 feet deep.

The main portion of the lake upstream from Highway 23 features an irregular
shoreline with dozens of points, bays, and islands. The 17-acre Alpena
Wildlife Sanctuary is located on the north shore of Lake Besser and
offers hiking trails and viewing platforms along the water.

Both emergent and submergent vegetation is abundant – excessive in the
summer. As with most impoundments there are a lot of submerged stumps.

Due to its proximity to Alpena, the lake gets a fair share of fishing
pressure and there are some shore fishing opportunities available.

There isn’t much history of fish stocking in Besser. About 135,000 walleye
fingerlings were stocked in the lake between 1986 and 1997. In an effort
to add another predator to the lake and provide a recreational fishery, the DNR began
stocking muskies in the impoundment in 2013 to the tune of 588, 8-inchers each year.

Eighteen different species and a total of 744 fish were collected during the most recent survey of the fishery.

The survey produced largemouth bass up to 18 inches, walleyes to 28,
northern pike to 27, and one 22-inch muskie. Although no smallmouth bass
were caught in the survey, anglers report catching smallies on a regular basis.

“Most of the (walleyes) were of legal size (15 inches or greater) and nearly
half of the specimens were greater than 20 inches,” Cwalinski wrote.
“…Ten age-classes of walleyes were collected with the oldest fish 17
years old. This species is not currently being stocked in Lake Besser,
and the fish are likely downstream migrants from upstream pulse stocking
efforts in Lake Winyah or the Thunder Bay River. Some natural
reproduction might be occurring, however, since high quality river
spawning habitat is available for fish in the river directly upstream of
Lake Besser.”

Pumpkinseed sunfish was the most abundant panfish species found in the survey. They
ranged up to 10 inches, although most were between 3 and 6 inches long.

The survey also produced decent numbers of rock bass to 8 inches, yellow perch to 10, bluegills to 10, and black crappies to 13.

“Because the survey was done early in the spring (cold period), we believe the relative
proportions of panfish in the catch were skewed low overall and that
many panfish were not near shore and vulnerable to our sampling gear,” Cwalinski wrote.

The best fishing is usually along the river channel and in the deeper water.

Crawler harnesses and jigs tipped with crawlers, leeches, and minnows will catch walleyes, as will crankbaits. Try working them along the weed edges and you’re likely to catch a variety of walleyes, bass, pike, and muskie.

Tubes, spinners, and topwater baits will attract bass when fished along the weeds or through stumps.

When the bite slows try a fat nightcrawler or a lively minnow floated beneath a slip-bobber.

Panfish are scattered throughout the lake and will hit wax worms, leaf worms,
chunks of nightcrawlers, crickets, and minnows. Try fishing them beneath
a slip-bobber so you can adjust your depth as needed to keep your bait
in the strike zone.

Multiple city boat launches exist along the south shore of the lake and river.
They offer launching for smaller boats and trailers, with limited
parking available.