Sheffield Lake, Ohio — The two largest walleye fishing tournaments on Lake Erie, the Walleye Fall Brawl and the Walleye Slam, concluded on Sunday, Nov. 27, and results were officially announced following the completion of polygraph tests. This year, to ensure consistency, the tournament directors of both derbies collaborated on the post-tournament testing.

The winner of both tournaments, James Holton of Holly, Mich., credits luck and ice for his victory. He and his friend, Tim McKinney, of Goodrich, Mich., traveled from Michigan to Cleveland on the morning of Tuesday, Nov. 22. After checking into a hotel, they headed to the Rocky River to launch McKinney’s 18-foot boat.

Unfortunately, Holton said, the river was iced up and they were not able to launch the boat. At the recommendation of some other anglers at the boat ramp, they decided to put their boat in at a launch in Lorain Harbor.

“We had never fished there before. But we knew they were getting them out of Huron, so we headed west. It was a little sporty out there, but we were coming back with the wind so it wasn’t too bad,” Holton said.

Holton and McKinney set their lines to troll blue and chrome Bandits in 43 to 47 feet of water, and it didn’t take long for them to get into fish and catch the prize winning 13.62-pound, 31.5-inch walleye that would make him the big winner.

“It was the very first fish of the day. After the rods were set it wasn’t five minutes before I caught the fish,” Holton said.

Thanks to the ice sending them to Lorain where the giant winning walleye was laying in wait, Holton is now the owner of two new boats, valued at over $300,000. First place in the Fall Brawl is a fully-equipped 2023 Ranger FS Pro 622 fishing boat with a 400-hp Mercury outboard. It is valued at $135,000. First place in the Walleye Slam is a 2022 Warrior V238 boat, which is also is fully outfitted with the latest in electronics and gear, including a 450-hp Mercury Racing outboard. That prize package is worth around $175,000. 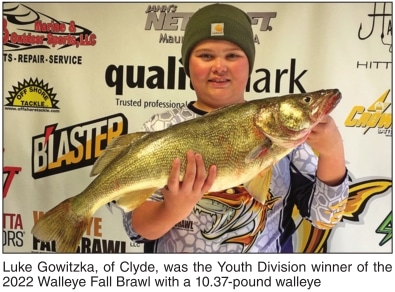 Holton said that entering the Fall Brawl and the Walleye Slam was an easy decision.

Holton, whose boat is named “Always An Adventure,” is an avid fisherman and hunter and was successful at both the week that he caught his winning walleye. The day before he caught the fish, he went deer hunting in Michigan and shot a nice 10-point buck.

Many other anglers share Holton’s enjoyment of the two fall walleye tournaments and enter both events. In fact, a number of anglers are going home with prizes from both tournaments.

The Walleye Slam awards cash prizes through 10 places as well as cash awards in its Kids, Women’s, Kayak, Shore and Veterans division. The Brawl awards a boat for second place and then pays cash prizes as well as cash awards in Kids, Women’s, and Kayak division. This year, there were 10,408 anglers entered in the Fall Brawl and 8,221 entered in the Fall Walleye Slam. Both tournaments began on Oct. 15 and concluded on Nov. 27. Winning fish are determined by weight, with the length of the fish used as a tie-breaker.

Because of controversy that was raised when two tournament anglers, Jacob Runyan and Chase Cominsky, were caught allegedly putting lead weights into walleyes in the Lake Erie Walleye Trail Championship earlier this year, the two tournaments collaborated on conducting polygraph tests this year.

In addition, both the Slam and Brawl used hand-held devices to detect metal.