As the ice-fishing season gets under way, there are what I consider ice-fishing essentials that every angler should be aware of when hitting the ice. 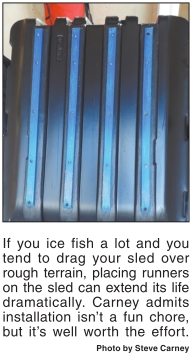 Ice-fishing gear has come a long way in terms of both equipment and clothing, but at the end of the day, the basics still reign. Here’s a primer.

It’s possible we may have clear, snow-free ice for a while, and if you don’t have good ice cleats, you’re asking for a mishap in the ice.

Stay away from the bargain cleats because they never make it through a whole season. Expect to pay around $80 for quality cleats with stainless steel teeth. Spending the money is better than a broken elbow
or hip. I wear them all season, no matter the conditions.

I bolted runners on all my portables fish houses two years ago, and it
was one of the best decisions I’ve made. I was wearing out the bottoms of my shacks on dirt roads and jagged ice and was astonished by the damage.

It took me about seven hours to bolt the runners on several portables, and it wasn’t a fun endeavor.

They are a pain to install, but they’re worth it.

If you’re an occasional ice angler, you probably could get by without
these tracks, but if you’re somewhat hardcore, I’d recommend making the
move. You’ll end up getting more years of usage from the sled.

I take one of the GPS units from my boat and attach it to my ATV with a
swivel mount This GPS plugs into the electrical ports on both my ATV and
snowmobile.

It’s the tracking feature that is important when heading out on the ice. I want
to make sure I follow the same trail back to the access and not wander
where I shouldn’t.

This is important on lakes you do not know well, and it’s especially
important after dark. I also have had fog problems during early
evenings, and the GPS saved the day for me many times on the ice. It’s
probably the most important safety feature you can own.