After swapping SD cards on a few cameras, I ambled into the box stand on the edge of a cornfield and tucked myself in for what I was expecting to be a deerless sit. I talk all the time about poor attitudes being hunt killers, but I’m not always great at practicing what I preach.

It was early December, there was a good layer of snow on the ground, and temperatures were forecast to be in the upper 30s – not exactly ideal when you’re banking on extreme cold to get deer on their feet early enough for a shot.

I about jumped out of my skin when I heard my dad’s muzzleloader bark well before dark only a few hundred yards from me. Considering the early time, I figured he must have filled a doe tag, so I waited a few minutes before texting him to ask what he’d shot. He replied that it was a big one, to which I called BS. So I called him immediately, and I could tell by his voice that he wasn’t joking.

We waited until dark before we took up the blood trail, at the end of which was a towering 8-pointer that I had never seen before. It’s hard to say which of us was in greater disbelief of what we were seeing.

The early part of December can be a strange time in the whitetail woods. The weather is usually vastly different from what it was a month earlier, winter is seriously settling in, and the deer herd has undergone a major shakeup after the firearms deer season. 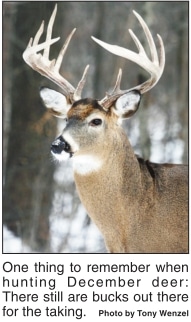 Couple this with highly limited food sources relative to earlier in the fall and the foreboding winter months ahead, and whitetails can start behaving in ways we never would have guessed. Mother Nature has shaped whitetails to have an extremely strong drive to feed this time of year in order to pack on as much fat as possible prior to the deep freeze of January. Not to mention, in early December there always seems to be a few bucks that can’t shake the lust for romance.

Over the years, these factors have led to a new mature buck showing up on my cameras in December nearly every single year. I typically have no idea where they came from, and it often seems as if they’re gone the following year, but during a couple-week stretch in December, there they are.

Although conventional wisdom would suggest that hunting on warm days is a poor strategy right now, I’m no longer convinced. If you
control huge acreages with minimally pressured deer, sure, pick your
days better. But on small acreages in high-pressure areas, I’m still
putting my time in, but trying to hunt smart in the process. Had my dad
listened to conventional wisdom that early December day, he’d have one
less rack on the wall to show for it.

Right now, and for the rest of the deer season, food is king. The number of
calories a deer consumes daily right now might literally be a
life-and-death matter by March.

This is where trail cameras and minimally invasive scouting can come in handy.
Knowing exactly what the deer are feeding on is generally going to be
the difference between a deerless sit and punching a tag.

I like to run trail cameras on all my food plots that still contain food,
and if I get a free midday, I’ll walk the fringes of the food source to
confirm deer use.

When viewing the trail cam images, I note where the daylight activity is
heaviest, and note the general direction from which deer seem to be
approaching. Go online and look up which way the wind was blowing those
days during which deer were feeding early.

I always beat this horse to death, but if you’re serious about notching
your tag, it’s absolutely critical to play the wind and hunt smart right
now. The deer are jumpy and paranoid after being hunted for months, and
they simply will not tolerate sloppiness.

Do not cut corners with your access routes to stands. Make sure the wind isn’t blowing into any sort
of bedding area as you go in, and practice scent-control to the best of
your ability.

If your stand is on a food source, get there early. Yes, the vast majority of
deer won’t be on it until half an hour before dark at best, but outliers
standing in the field at 2:30 p.m. will make you kick yourself for
sitting on the couch an extra 20 minutes.

When hunting near food sources, I have two strategies for leaving at the end
of the day. The first is to have someone with a vehicle drive to the
base of the stand at dark to pick me up. The second –
and the one I use most frequently – is to unload my gun and stay put
until the deer either clear the field or it’s at least a half hour after
dark.

If it’s at least a half-hour after dark when they get bumped, deer seem to
be much more forgiving of the intrusion. Yes, it can be miserable
sitting even longer when it’s cold, but if the alternative is guaranteed
crappy hunts later on, I can suck it up.

If you know where the hot food source is and the spot
either isn’t set up to handle frequent hunting or it’s just not
possible to avoid educating deer, one of my favorite strategies is to
figure out how deer are getting into the food source and then get a
setup in place along their travel route from bedding to feeding.

It can seem on the surface that this is much riskier than sitting near the
food source, and in many cases it is. Sometimes getting into the cover,
however, is actually a much safer play and educates fewer deer.

This is where trail cams can be game-changers. If there’s a specific buck
that shows up just a little too late, notice where he’s coming from.

Most of the time, if he’s getting to the food source right after dark, odds are he’s staging in
the cover not far from the food. Get a setup in place to take advantage
of this and perhaps take advantage of a daylight opportunity to notch
that buck tag.