Lakeview, Ohio — Indian Lake in north-central Ohio is one of those Buckeye State fishing holes that produces year around. 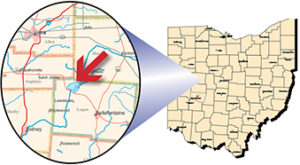 That includes ice fishing, and Indian is one of the first places in Ohio where anglers flock to the hardwater.

Indian has been plagued by an abundance of weedy vegetation over the past couple of years, but the lake seems to be turning a corner in that regard, said Ethan Simmons, a fishery biologist for the Division of Wildlife.

“The weeds should not be a factor for ice fishing this year,” he said. “They may even be beneficial in that some of it still may be at the bottom of the lake.”

Indian is big at 5,040 acres, and diverse with a number of islands (68 of them) and peninsulas that allow anglers to work the structure. Formed by damming the Miami River in 1852, Indian Lake is situated on former swamp land and several small natural lakes. It once served as a source of water for the old overland canal system.

“It’s mainly shallow,” said Nick Radabaugh, fish management supervisor with the Division of Wildlife in Columbus. “Average depth is maybe five to six feet. It’s one of the biggest lakes in the state. And, there are so many channels … that makes it one of the best places to go panfishing, as well.”

Indian Lake is one of the biggest lakes in Ohio and certainly the largest reservoir in Central Ohio, said Tim Parker, another fisheries biologist with the Division of Wildlife.

Saugeye is the most sought-after species here with an aggressive state stocking program providing the fruits for the labor. The hybrid has been stocked at Indian Lake since 1990 when it replaced walleyes, which were stocked up until 1984. Since 1995, an annual average of more than 675,000 saugeye fingerlings have been stocked.

“It really does great with our stocking,” Radabaugh said. “We seem to get really consistent recruitment there. And, being a canal reservoir, you don’t lose as much water (through the spillway) as some of our water supply lakes. The fish stay in there. And, like a lot of other lakes, it’s super productive with a lot of shad to eat.”

Parker agrees, even saying that Indian “is probably the best saugeye lake in the state. It’s just a factory for them.”

For saugeye success, the Division of Wildlife recommends anglers try the Moundwood canal feeder during winter and the Old Indian Lake area in summer. South Bank is also a good spot for saugeyes. Boating anglers also take their fare share of saugeyes by trolling jig and minnow combinations in deeper water. Vertical jigging is also a technique that will put fish in the boat.

“There’s also a fair number of (anglers) who like to slow down and pull worm harnesses and bottom bouncers for saugeyes,” Radabaugh said.

This winter should be a good time to target saugeyes, said Simmons.

“Assuming we get ice, this should be one of the best ice-fishing years in recent memory,” he said. “The weeds have really benefited the yellow perch population and they get caught under the ice more often than in soft water for whatever reason.”

Simmons said the Division of Wildlife has sampled some good sized perch in recent outings, some up to 12 inches and fat.

The lake has a good population of bluegills in the 6- to 8-inch range, according to DNR Division of Wildlife surveys. Many quality bluegills are caught through the ice by anglers using wax worms or nightcrawlers. Bluegills are thick around Long Island, back in the game preserve, and also at Dunn’s Pond and Lucy’s Pond.

“I would say that’s what Indian is known for (panfish) behind saugeyes,” Radabaugh said. “ … You hear a lot about good numbers of (panfish), but you also hear of good size as well. You always here about 15-inch Fish Ohio crappies coming out of there.

“And, for bluegills, it’s one of the handful of lakes where you’ll see fish up to 10 inches or better,” he said.

There is a 30-fish, 9-inch limit on crappies here.

“In the last few years, crappies have done really well there,” Parker said. “Our sampling surveys don’t necessarily show it, but from what we see from anglers catching them it’s really a great fishery. A lot of big black crappies.”

So good have the crappies been, said Parker, that the Division of Wildlife’s central office has been pointing crappie anglers toward Indian in recent years along with the longstanding quality crappie lake in Delaware. The point is that Indian has been that good, he said.

Channel catfish is a under utilized species here, according to the Division of Wildlife. Night fishing in areas with current is especially good during warm summer months.  Tributary streams are good spots to try immediately after ice-out and then move into the upper basin during summer.

The Division of Wildlife rates Indian’s largemouth bass population as good with most fish from 12 to 18 inches. There is a statewide regulation in place here that dictates a 12-inch minimum for keeper bass. Channels and vegetated areas are best during April and May. In later months, riprap areas produce well.

White bass present fair angling opportunities in the spring, particularly April and May when they run in schools. The population ranges from 10 to 14 inches, according to fisheries surveys. The South Bank area is a good spot to try in the spring. Night fishing with minnows near bridges is popular during the summer months.

Boating anglers have their choice of five launch ramps, all within Indian Lake State Park. Ramps are located at the campground, Blackhawk Marina, Chippewa Marina, Lakeview Marina, and Moundwood Marina.