Town of Seneca, Wis. — An 11-year-old boy was accidentally shot in the chest and killed while deer hunting the morning of Sunday, Nov. 20, according to the DNR. Authorities said Easton Thom was shot when a 41-year-old man attempted to unload his firearm while it was placed in the back seat of a vehicle.

The gun discharged and hit the middle school student in the chest. Thom was flown to a hospital, where he died. It happened about 9 a.m. in the town of Seneca in Green Lake County.

The boy and the man were members of the same hunting party.

It’s not clear if the man who was handling the firearm will face criminal charges.

According to a DNR press release, the DNR, Green Lake County Sheriff’s Department and emergency medical services responded to the fatal incident.

“The Wisconsin DNR and the Green Lake County Sheriff’s Department express our sincere condolences to the family and friends of those impacted by this loss of life,” officials from both agencies said in the press release. 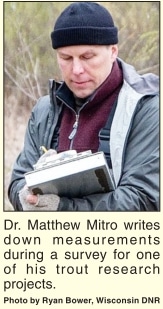 Mitro’s 19 years of research was recognized by the award given to an individual who has shown “unparalleled initiative towards the better understanding of fishes and their conservation,” according to the MAFWA. Mitro’s work focuses on inland trout species, including: trout and stream habitat monitoring study; research on gill
lice; contributing to the trout and beaver management plans; and
modeling changes in-stream temperature and trout distribution.

“I always had a personal interest in trout, as trout were one of the first
fish I ever fished for as a kid,” Mitro said. “They are beautiful fish.
They are important indicators of wider environmental health.”

Mitro is now focusing on a statewide project investigating the influence of
beavers on trout populations and habitat in streams. He is also
evaluating the survival and reproductive fitness of different strains of
stocked brook trout in streams.

Contact Jenny Clark at (715) 212-0432, or go to https://events.nwtf.org for
more details. The weekend includes the Great Lakes call-making contest,
workshops, raffles, banquet, and entertainment. Cost is $75 per person
and discounted lodging is available.

Eau Claire, Wis. — The UW-Eau Claire Recreation Department, Blugold
Athletics and the Lake Wissota Lion’s Club, along with sponsors Scheels
and Eau Claire Ford, will give away $80,000 in cash and prizes,
including a two-year lease on a Ford F150, to be drawn from all
registered tickets during the annual Jig’s Up Tournament on Lake Wissota
Saturday, Feb. 11, 2023.

Prizes will be awarded by weight to the top 20 fish and every 10th place
thereafter to 480th place, then 481st through 500th place.

Each participant may register one fish per ticket; tickets are $25, with no
limit on the number of tickets. Everyone who registers a fish may
request two free Blugold football tickets at the weigh-in stations
(value $16). Raffle prizes include a Polaris Sportsman ATV, $500 Scheels
gift cards, and more. Raffle tickets are $5 each or five for $20; $100
gift card prizes are awarded for the top fish by weight in each
category: northern pike, walleye, and panfish. The Scheels Kids Klub
fishing event will take place at 11 a.m.

The weekend includes live and silent auctions, vendor displays by
outfitters, taxidermists, and more, along with workshops, exhibits, and
free scoring of trophy heads. There will be free admission Saturday,
Feb. 10, 2023, from 10 a.m. to 2 p.m. Call Sarah Ingle at (262) 437-0097
for more details, or go to www.sciwi.org.