Tony Lorenz could have taken his son deer hunting near their Galesville home in some of Wisconsin’s most prime whitetail habitat.

Instead, the pair spent opening day of Wisconsin’s gun deer season about 150 miles away in Hartman Creek State Park. Tony Lorenz and Rowan, 12, showed up at the park’s boat landing on Knight Lane shortly before noon Saturday, Nov. 19, before heading out on their first hunting trip to the park.

“We have friends who live around the area,” Tony Lorenz said. “They’re out hunting today, a whole bunch of them.”

The duo had never been to the park before, but Tony Lorenz had hunted on private land in the area in the past.

“My friends go here quite often and they found (the hunting is) pretty good,” he said. 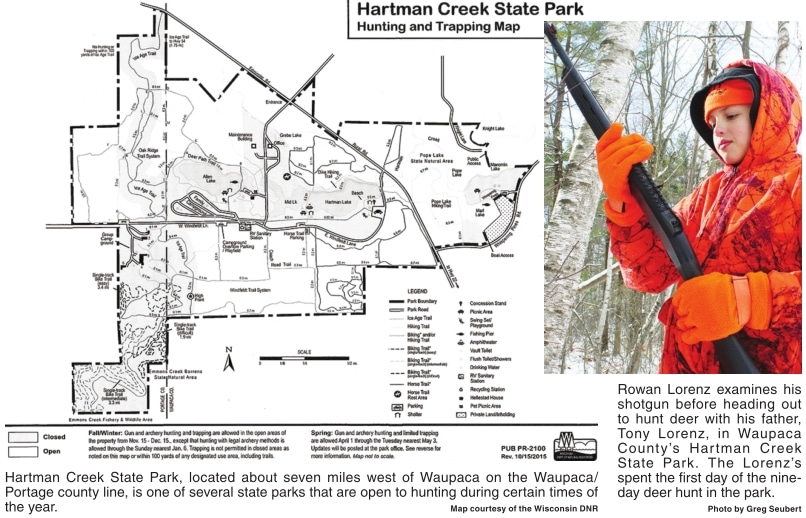 While a handful of other hunters opted to stay overnight in the park’s campground, Lorenz and his son camped in a hut in his friend’s backyard. Hartman Creek is one of several state parks that allow hunting during certain times of the year. The park, located seven miles west of Waupaca on the Waupaca/Portage county line, is open to hunting Nov. 15 to Dec. 15.

According to DNR figures, Waupaca County reported the second-highest deer harvest this year as of Nov. 15. Marathon County led the state with an archery harvest total of 3,263 animals, followed by Waupaca County at 2,951.

The elder Lorenz said he likes to hunt on public land.

“I found that the people who hunt on public land are really cool,” Tony Lorenz said. “There are guys with private land who don’t care about anything else.”

Tony Lorenz also hunts near his home in Buffalo County.

“There’s a little bit of public land there that I go on once in a while, but it’s so hard to get to and that’s why nobody goes on it,” he said. “You can find some monsters in there.”

Tony Lorenz started hunting as a kid and now wants to pass the tradition to his son.

“I’ve hunted my whole life,” he said. “The whole family would be out there, but now it’s kind of a dying thing for families. We’re trying to
continue it with my friends and me and getting our kids into it. I teach
my son everything he needs to know like tracking and all that kind of
stuff. We clean our guns and get all of our warm gear ready.”

This isn’t the first time Rowan Lorenz has deer hunted with his dad.

“I like spending time with my family,” Rowan Lorenz said. “It’s
super-exciting because it’s always new each year. You never know what’s
going to happen. You could see a monster buck.”

They weren’t after that buck of a lifetime, however.

“I’ll bet there are a lot of does here,” Tony Lorenz said. “We’re not really rack hunters. We’re meat hunters.”

Hunting has turned into an expensive activity, but the elder Lorenz doesn’t mind.

“I spend hundreds – maybe thousands – of dollars just to stay warm,” he
said. “My dad quit hunting just because of all the hype (in Buffalo
County). It had become too much of a highpriced deal.”

If Lorenz has his way, his son will pass the hunting tradition to his own kids down the road.