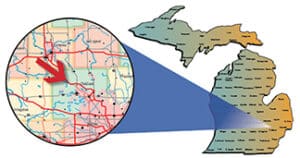 Maceday and Lotus lakes in Oakland County are the exception to that rule. DNR Fisheries Division stocks rainbow trout, splake (a hybrid cross between a lake trout and a brook trout), and lake trout in Maceday and the effort has paid off in a viable inland lake trout fishery in southern Michigan.

“The lack of other coldwater species such as rainbow trout and cisco in the survey is concerning, especially since rainbow trout were as readily caught as splake in the 2005 angler survey and prior fisheries surveys on Maceday Lake. Predation from large splake and lake trout could be negatively impacting rainbow trout and cisco populations, but there is uncertainty about the level of impact the larger predators are having.”

Maceday and Lotus are essentially one body of water, located in central Oakland County just east of the Pontiac Lake State Game Area. The basin at the north end of the lake is referred to as Lotus Lake and covers 185 acres. The basin to the south is called Maceday Lake and covers 234 acres. With a maximum depth of 117 feet, Maceday is where the trout are planted and thrive.

Maceday Lake has one large, deep basin, surrounded by sharply sloping drop-offs and two significant shoal areas. The southern shoal is a shelf extending approximately 600 feet from shore with scattered aquatic vegetation and a sandy marl bottom. The northern shoal makes up the connection to Lotus Lake. It features both submerged and emergent aquatic vegetation and some stumps.

Stocking records indicate that the DNR has been planting fish in Maceday and Lotus lakes since the 1930s when bass and perch were stocked. Rainbows and lakers were first planted in 1947 and splake in 1966.

Fisheries biologists also have toyed over the years with stocks of walleyes, brown trout, and whitefish but the focus has been on rainbows, lakers, and splake.

Many local anglers target the splake and rainbows at night with submersible lights. Work the breaks around the deepest holes with worms or corn threaded on a single hook. Trolling with spoons or nightcrawler harnesses will catch trout during daylight hours.

Successful lake trout anglers focus their efforts on the deepest water in Maceday. The winter bite seems to attract the most attention. Try jigging spoons and cutbait fished right on bottom in and around  100 feet of water.

In the 2019 and 2020 surveys, DNR captured close to 2,000 fish representing 28 species but rainbow trout and cisco were absent from the survey.

“The trout stocking program continues to be successful and allows a unique fishery to thrive in the southeast region of the state,” Harris wrote. “The lack of rainbow trout in the catch, along with angler reports of not being able to catch rainbow trout, suggests further investigation should occur to understand the survival of stocked rainbow trout and subsequent recruitment into the fishery.”

Bluegill was the most abundant species found in the survey. The ’gills ranged up to 9 inches, but averaged just 3.7 inches. The survey also revealed good numbers of pumpkinseed sunfish to 8 inches and averaging 6.2, largemouth bass up to 19 inches, and rock bass to 8 inches.

The survey also found decent numbers of yellow perch to 8 inches, splake to 21, lake trout to 35, smallmouth bass to 19, and northern pike to 35. There also were light numbers of black crappies to 12 inches, channel catfish to 17,  and hybrid sunfish to 6.

When you combine the trout stocking efforts with robust panfish and bass populations it’s no wonder that Maceday and Lotus attract a good amount of fishing pressure.

The sunken island near the south end of Lotus Lake is a good spot to search for panfish and bass. The breaks off the east side of Blain’s Island are worth checking, too.

In the spring, panfish flock to the shallows that connect the two lakes on the west side of Blain’s Island. Wax worms, leaf worms, and poppers are all good choices when targeting panfish in the shallows.

The public access site is located off Williams Lake Road at the south end of Maceday Lake. It features a paved ramp and parking for 17 vehicles.