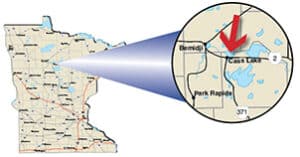 It just doesn’t seem right that Pike Bay Lake is named as such. With more than 4,700 acres of fishable water, this Cass County fishery is anything but simply a bay.

What is it? It’s a phenomenal fishing lake, part of the prolific Cass Lake Chain of Lakes. That means its walleye- and jumbo perch-fishing opportunities are off-the-charts strong, as they are throughout the entire system.

While walleyes and perch are Pike Bay’s bread and butter, the lake also holds some quality northern pike, a few panfish, fishable tullibee and eelpout populations, along with a few muskies – although your odds of hooking one of those big fish is better on its connected waters such as Cass Lake.

Pike Bay tends not to be as busy as other lakes in the chain. For Bemidji-area fishing guide Dick Beardsley, that’s another upside to fishing it.

“It’s a big darn lake. You could fish it for a couple of days and not hit all the spots,” Beardsley said. “There might be boats all over Cass and almost nobody on Pike Bay. You can put people on fish and not have to play bumper boats”

On the walleye front, Pike Bay’s numbers are exceptional. Gill nets averaged over nine walleyes per lift in a 2019 DNR survey, which was up from six fish per net in 2015.

Anglers should also take note that the majority of the walleyes were of the catch-and-clean variety, along with a whole bunch of shorter fish  that should be prime to keep in the near future.

“We saw good numbers of 14-inch and 18- to 19-inch walleyes in that survey,” said Andrew Wiering, DNR Fisheries specialist in Bemidji. “There were a lot of shorter walleyes, too. They should be eaters right now.”

Pike Bay’s impressive walleye numbers are mainly the result of fry stocking, which occurs annually. According to Wiering, the key to walleyes’ success on Pike Bay is that it’s stocked later in the year than are most lakes.

“It’s a big, deep lake, so it takes a while to warm up,” he said. “So we stock it later, toward the end of the (hatchery) hatch. That seems to work well.”

If walleyes are No. 1 on local anglers’ lists, it’s the walleye’s cousin, the yellow perch, that would be 1A on Pike Bay. The lake also has a fine reputation for kicking out numbers of quality perch, especially during the winter months.

Perch in the 10- to 12-inch range are common, with a few slightly larger fish in the mix. Most impressive, they get hit hard by anglers at times, but they seem to keep their size structure intact.

“A lot of people go after them in the winter, but it’s a really consistent perch producer,” Wiering said. “They grow fast. It’s a really healthy food web – a revolving door that keeps moving. Despite (fishing) pressure, it keeps up.”

A solid tullibee population and an abundance of deep, cool water, benefits the lake’s northern pike. It’s a lake that tends to have more quality than quantity regarding pike.

The pike sampled in 2019 averaged just over 3 pounds, and over 60% of those fish were longer than 22 inches, with a handful up to 34 inches in length.

“You always catch a few pike when you’re walleye fishing it,” Beardsley said. “But you don’t catch many small fish.”

While the Cass Lake chain is one of the state’s more noted muskie fisheries, Pike Bay might be the weak link in that regard. While muskies are present, their numbers are nowhere comparable to adjoined lakes.

Panfish are few and far between in Pike Bay. Again, other lakes in the system provide better opportunities. But if you run across them, they tend to be good-sized.

Tullibees, eelpout, and even whitefish are worth consideration during the winter as well.