Expect plenty of bass – and boaters – when fishing Cross 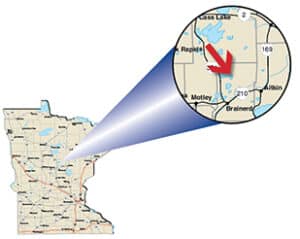 During the open-water fishing season, you might want to keep your head on a swivel when fishing Crow Wing County’s Cross Lake. As part of the popular and heavily-used Whitefish Chain of Lakes, there’s an insane amount of boat traffic – typically more recreational than angling – on this crystal clear, 1,815-acre system.

Cross is technically a reservoir and one of about a dozen lakes that make up the Whitefish chain. It’s a decent fishery from a mixed-bag standpoint, which is probably the mindset with which you should approach it.

“It’s a very busy lake, so you pick and choose your times to fish it – usually early and late each day,” said Nate Blasing, a member of the Nisswa Guides League. “The selling point with my clients is that Cross is a good multi-species lake, you can fish the entire chain, and we’re going to bend the rod.”

Its variety of fishing options often starts with bass. Largemouth bass numbers are considered above average, and an expanding smallmouth population is a bonus to the lake’s fishing opportunities.

While smallies are somewhat of a secret, Blasing says there are certain spots that do hold decent concentrations of them. And when you hook one, it’s likely to be a good-sized fish.

There’s plenty of in-lake structure throughout Cross that holds bass. Its deep weedlines, points, and sunken islands often give up a combination of both bass species.

Putting together a batch of respectable panfish usually involves sorting through quite a few small ones. Crappies and bluegills are both abundant in Cross, with an edge to its crappies from a size standpoint.

During a DNR survey last summer, crappies from 6 to 12 inches in length were sampled. Bluegills between 7 and 8 inches should be expected on the upper end of the size spectrum, with a few over 8 inches long in the mix.

That’s been the norm for Cross over the years, but several of the other lakes within the Whitefish chain do hold panfish of better quality or have the potential to do so.

As a result, bag limits have been reduced to five crappies and five bluegills throughout the chain, including Cross. The limit reduction is likely going to have more of an effect on the other lakes in the system.

“The potential is there for bigger panfish in some of those lakes,” said Carl Mills, DNR Fisheries specialist in Brainerd. “The regulation is not specifically for Cross, but it was included because it’s part of the chain.”

Cross’s walleye population is maintained through stocking – walleye fry annually and fingerlings during even-numbered years. Generally, several of the other lakes in the chain are noted for better walleye fishing.

The DNR survey last August yielded just one walleye per net, the lowest ever recorded. In a 2018 survey, gill nets averaged just more than three walleyes per lift. Mills believes last summer’s results might not have been a fair representation of what’s in the lake for walleyes.

Blasing also believes the lake’s walleye population is in better shape than the most recent survey reflected and that Cross tends to have windows of better walleye-catching opportunities. He says working midlake humps early in the season will produce walleyes.

“The (walleye) fishing can be good if you’re willing to put in your time and move from hump to hump,” Blasing said. “The last three years have been pretty good through about mid-June, and the lake has nice walleyes in it.”

Blasing’s “going-to-bend-the-rod” theory can also be applied to the lake’s northern pike. Cross is loaded with pike, and catching them is relatively easy throughout the lake. But don’t expect much in the way of large pike.