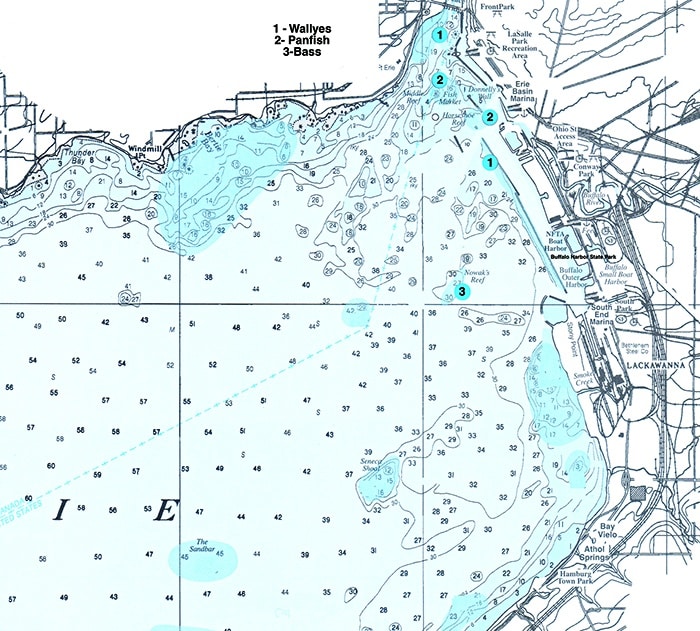 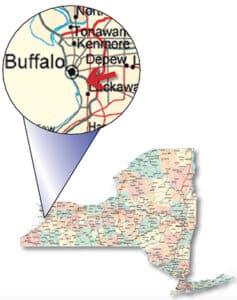 Along with the opportunity to target a variety of fish species, the massiveness of the Great Lakes draws anglers from far and wide and both Lake Ontario and Lake Erie have places that appeal to a wide array of anglers. On Lake Erie, the area around Buffalo Harbor is surely one of those places.

First, Buffalo Harbor State Park, the newest in New York, boasts that it is home to a 1,100-slip marina, a restaurant, boat launches, personal watercraft launches, a fish cleaning station, restrooms, and a beach. There’s obviously more happening here for activities beyond angling.

A Region 9 spokesperson for the New York State Department of Environmental Conservation says that Buffalo Harbor is an extremely diverse, year-round, multi-species fishery. It offers a completely different fishing experience than the main lake and is located right next to the second biggest city in the state.

The harbor is unique for the New York waters of Lake Erie in that it’s a very accessible, sheltered area offering opportunities when the weather is poor, or for folks who might have a smaller boat or kayak that they don’t feel comfortable taking out on the main lake. It even offers some shore fishing opportunities, something relatively rare in Lake Erie.

DEC says Buffalo Harbor is a main launching point for boaters heading to nearby smallmouth bass and early season walleye hot spots. In addition, there is excellent smallmouth bass fishing in the harbor and around the break-walls during May and June. During summer and fall, harbor anglers can also catch largemouth bass, northern pike, a variety of panfish and the occasional muskellunge.

And let’s not forget winter. Throughout the ice fishing season ice anglers flock to the harbor where some jig for perch amongst the docks. DEC says the yellow perch ice fishery in the harbor is the most reliable winter fishery in the New York waters of Lake Erie.

Several panfish species can be targeted through the ice as well. Others head for more open areas. A Fishing Reports photo in the March 19 issue of New York Outdoor News showed an ice angler with a trophy northern pike he’d caught in the harbor.

Getting back to the warm water season, things should be really picking up in the area with May on the horizon. The focus, obviously for Lake Erie anglers is on the reopening northern pike and walleye seasons on May 1.

“The spring fishery for smallmouth bass in the harbor is one of the most popular on Lake Erie and draws anglers from all over the country,” the spokesperson said.

Lake Erie’s bass fishery is certainly well-known, as many tournaments have been held in New York and other states by B.A.S.S. and Major League Fishing.

And of course, there’s that classic walleye fishery, which can also be sampled from the harbor.

“In years with an abundance of two- and three-year-old walleyes, there are opportunities to catch legal-sized fish in and around the harbor,” the spokesperson said. “Anglers target walleyes from shore from the southern tip or the bird island pier. Bottom bouncing or casting near the north gap or south gap can be productive. Night fishery just outside the break wall can also yield walleyes into the summer.”

As for other fish species, weedy areas on the eastern shore offer potential for anglers to target northern pike and largemouth bass.

And when muskie season eventually opens, DEC says the first couple of weeks of the season will offer good muskie fishing opportunities, but it tapers off quickly and the focus turns to the upper Niagara River during the summer. Muskie fishing picks back up in October and November. This area offers the opportunity for anglers to have an encounter with a truly trophy-size muskie.

DEC said that the Lake Erie Research Unit in Dunkirk and the Region 9 Fisheries staff work together closely to monitor and manage this fishery.

There are numerous special regulations in place for Lake Erie and its tributaries. Consult the Great Lakes and Tributaries Regulations section in DEC’s new edition of the New York State Freshwater Fishing Regulations Guide.

The Buffalo Boat Harbor is located off Route 5 at 1111 Fuhrman Blvd. in Buffalo. There is a hard-surface ramp open from May 15 to Oct. 15 with parking for 1,100 cars and trailers. There is also a cart-op launch just south of the main harbor at Gallagher Beach. A fish cleaning station is also provided.

There is also a popular municipal launch at Erie Basin Marina, 329 Erie St., in Buffalo where there is a hard-surface ramp, parking for 50 cars and trailers.

An excellent resource for traveling, fishing, boating and enjoying the entire Great Lakes region is DEC’s I Love NY Guide to the Great Lakes, which can be downloaded at dec.ny.gov/docs/fish_marine_pdf/glfishing.pdf.