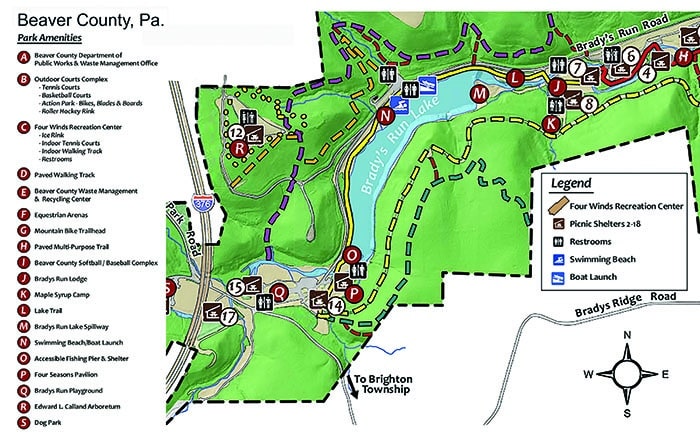 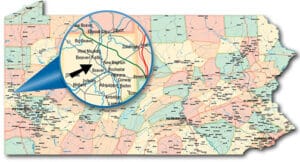 There’s a definitive before and after when it comes to Brady’s Run Lake in Beaver County.

The 28-acre impoundment is a centerpiece of the county park by the same name. It has been since it was built in 1948.

But, as all lakes do over time, it slowly began to fill in. County officials hired a contractor to dredge it in 1986 and 1987, but by the early 2000s it was again full of silt. The lake was down to 7 feet at its deepest.

So the county invested another $2.1 million in local and state funds to completely drain it over the summer of 2010. That involved removing loads and loads of mud, not to mention oddities like countless old sneakers and even an airplane engine.

Starting in 2011, it was allowed to refill. The Pennsylvania Fish & Boat Commission, which has long stocked the lake with adult trout, began again putting those fish in.

Brady’s Run also got some adult bass and panfish from Upper and Lower Hereford Manor lakes, also located in Beaver County, when they were permanently drained because of their unsafe dams. Later still, some fingerling game fish were released into the lake.

Now is the after to the pre-dredging’s before. And it’s pretty good.

Surveys of the lake, together with angler catch reports, suggest that Brady’s Run Lake offers better fishing now than it has in decades.

Its stocked trout – which prefer cool to cold water – are typically able to make it longer throughout the year now that the lake’s maximum depth has almost tripled, to 20 feet or so in spots.

The lake gets plenty of those fish, too, and throughout the year. In addition to pre-season and in-season stockings, it gets fish late each fall for the sake of fall and winter fishermen, who fish from shore and through the ice when conditions permit.

Brady’s Run Lake was stocked with trout most recently the week before Thanksgiving, so there should be plenty of fish to catch right now.

Beyond trout, the lake’s other species of note is largemouth bass.

Fish & Boat Commission officials have surveyed Brady’s Run Lake numerous times over the decades. There was a time, in the mid-1990s, when that work revealed a fairly large population of bass. They tended to be small, though, with most in the 4- to 10-inch range. Legal-sized fish were almost non-existent.

And then things got worse.

By 2005 legal bass were still scarce. But so were bass at all. Populations dropped to about one-seventh of what they were a decade before.

Things started to turn around a bit thereafter, when Brady’s Run got put in the “big bass” program, which limits anglers to keeping four bass a day, all of them at least 15 inches long.

General statewide rules for bass allow a harvest of six fish a day, and they need be just 12 inches.

Brady’s Run Lake’s bass population really took off after the dredging work was done, though. And it remains strong today.

Commission biologists returned to the lake to re-survey it in spring of 2020. The total number of bass they captured was almost three times what it was in 2013, the first time it was examined post-drawdown.

What’s best of all is that the number of bigger bass were both greater than at any time in more than 10 years. The largest bass stretched 19 inches.

All indications are that those trends should continue into the future, too. The reason is the same one that’s actually hurting panfish populations in the lake.

Certain “rough” fish that were removed from the lake when it was drawn down made it back on their own when it refilled. Carp, for example, that escaped being captured swam up in to the lake’s tributary streams as it was drawn down, then returned when conditions were favorable.

The story is the same with gizzard shad.

“Brady’s Run Lake appears to contain an over-abundance of gizzard shad, as was the case prior to dewatering. This promotes good growth in largemouth bass, but this species can lead to diminished panfish populations,” biologists wrote.

They tried removing some of those shad, returning to the lake a few years ago to electroshock their way around the lake. The purpose was to shock shad, catch them as they floated stunned to the surface, then remove them.

They took out countless fish. But the number of shad even then was so overwhelming that the effort made little difference in the end.

The commission’s plan is to survey Brady’s Run Lake again in spring of 2021, this time using trap nets. Those are best for getting panfish like bluegills and crappies, not to mention catfish.

If indeed the presence of all those gizzard shad is hurting panfish numbers and sizes, biologists say they’ll try other management approaches – perhaps stocking catfish or other predators that eat shad – to try and rectify things.

But that’s for the future.

Right now, Brady’s Run Lake is a good place to fish, through the ice or open water, for its stocked trout and thriving largemouth bass.

WHAT YOU SHOULD KNOW: Gizzard shad and carp have made their way back to the lake.

Surveys and angler catch reports say the lake offers better fishing now than it has in decades.

The lake was stocked with trout the week before Thanksgiving.

PF&BC biologists returned to the lake to re-survey it in spring 2020 and found almost three times the number of bass than found in 2013.

HOW TO GET THERE: Two miles north of Beaver on Route 51.