Adding some juice to ice fishing 2021 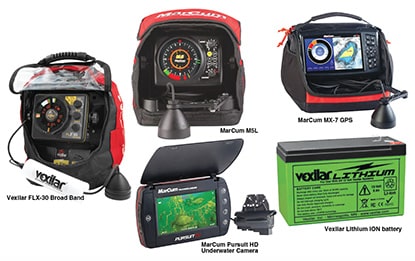 The high-end ice fishing electronic lineup is thinner this year than most. But the new tools available will garner much interest among anglers.

While the Garmin Panoptix system created a ton of buzz the past two years, a pair of big ice fishing hitters, Vexilar and MarCum, stand out this season with their new electronic options.

From a powerful 150 kHz to a high definition 300 kHz, the beam signal size variates from 20 degrees to 7 degrees. The 525 lines of display resolution make the Vexilar flasher sonars unbeatable in target ID and brightness.

Most important, the FLX-30 eliminates interference, allowing the angler to select the proper frequency to remove suspended particles and insects from view to deliver the cleanest, sharpest and highest resolution display on the market today.

Vexilar has been supplying sealed lead acid batteries in its ice fishing packs for 30 years. But the popular nature of light-weight Lithium Ion batteries has not gone unnoticed by Vexilar.

Not all Lithium Ion is created equal. The highest quality LiFePO4 cells are balanced and linked to a custom control circuit made to Vexilar’s specifications that controls the input and output of the battery. This custom-built Vexilar Lithium battery delivers 12 volts with 9 amps of capacity.

It’s a battery that’s 50% lighter in weight than traditional lead batteries, delivers longer run times and twice the number of re-charging cycles. Only premium components were used in making of the Vexilar Lithium batteries, and they have a two-year warranty.

The new MarCum Pursuit HD underwater camera puts 20 years of technology in the palm of your hand, tapping into the top trends in underwater viewing. Hand-held and HD attributes are a big direction in cameras now.

It’ll also serve stationary anglers with an HD-video out. Plug it into an HD TV common in modern wheelhouses, and you’ll see the MarCum Pursuit HD really shine with its 2,073,600 pixels.

MarCum is introducing a sonar/GPS combo that serves hard-water first. The new MX-7GPS pairs GPS and mapping with the most advanced, proven ice sonar of all time. In addition, real-time was often lost in a sonar/GPS combo unit, but the MarCum MX-7GPS now fills that void.

The MX-7GPS’s real-time display shows the entire water column, presentation, and the fish’s reaction can be viewed on a myriad of screen settings, sizes, and options at once.

Just as anglers of the past herded toward GPS for precision mapping, they’ll appreciate the performance and coverage of Navionics electronic map charts. Anglers can enjoy the performance of the MX-7 GPS, while taking advantage of mapping features.

The MarCum M3L and M5L focus on taking existing ice electronic technology to the next level, and with a worthy power source. The M3L offers the same interference rejection, moveable zoom, light pipe, and target separation MarCum users have with the existing M3. But now, it’s equipped with the 12V10AH LiFeP04 powerhouse and charger in the MarCum Brute battery.

Similarly, the M5L features this same technology, but with a switchable transducer, and even more distinct clarity through the Super Fine Line Feature. It also sports a MarCum Brute and charger, the new standard in LiFeP04 technology and safety.

MarCum has unveiled four new battery options purpose-built for all situations outdoors. Each exists as a lithium-driven energy source that’s lighter, longer-lasting, and cheaper to own than the standard sealed lead acid batteries of old.

The MarCum Mite Lithium Ion battery is a 12V7.5AH featherweight, and at just over a pound is the lightest battery in the MarCum line. The MarCum Brute is a 12V10AH, Lithium LiFePO4 option, that’s the workhorse of the lineup. MarCum puts it in nearly all of its L-series flashers.

The MarCum King is another Lithium LiFePO4 option, and at 12V18AH, there’s power in the tank for reserve and then some. The MarCum King delivers deep cycle performance in a compact, portable form-factor.