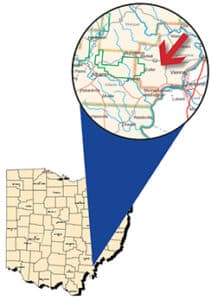 Veto, Ohio — At an average depth of just 8 feet, Veto Lake in southeast Ohio is quick to turn turbid and slow to clear up.

But, that’s not all bad for the angler who’s looking to catch some catfish and largemouth bass, and this Washington County lake has plenty of specimans of both species.

“This is still an excellent catfish lake,” said Mike Greenlee, fish management supervisor for the DNR Division of Wildlife in Athens.

Sampling efforts carried out by the Division of Wildlife in 2016 showed good numbers and sizes of channel catfish, said Don Swatzel, a Division of Wildlife fisheries biologist. The largest fish sampled in that survey weighed just shy of 9 pounds at about 27 inches in length. The catfish population consists of a good distribution of sizes with many fish in the 20- to 24-inch range.

“Along with our other yearling channel catfish lakes, Veto is stocked every other year on an even-year stocking schedule,” he said. “Yearlings typically measure between 8 to 14 inches at the time of stocking in the fall.”

The largemouth bass population is rated as moderate. There is no specific keeper length regulation here, so the lake falls into the statewide keeper length of 12 inches with a daily bag limit of five fish.

“The last electrofishing survey was completed in 2018,” Swatzel said of bass sampling. “Anglers can expect good numbers of larger bass to target. Of all the adult bass sampled in this survey, 62% were 12 inches or larger and 34% of this same sample were 15 inches or larger. Largest bass in the sample was 21.5 inches long.”

The lake was formerly a place where an angler might catch a spotted bass, but none showed up in the most recent electrofishing survey.

Crappies are fairly abundant here with the best spot to try being right off the only boat launch on the lake at the south end. Anglers will find deeper water here – with some depths up to 20 feet – and there is some artificial structure that was placed by the Division of Wildlife some years ago. There’s also plenty of natural cover – fallen trees and brush piles – that hold a fair number of panfish.

“Crappies were last sampled in 2014,” Swatzel said. “That survey showed white crappie as the predominant species. Population is large but size is on the small side. In all, 73% of all crappies caught in the nets were between 6 to 7 inches. There were only a handful of crappies over 8 inches and the largest was 12 inches.”

Bluegills are heavily populated, but they run small, says Swatzel. Most of the bluegills in the survey were less than 6 inches.

Redear sunfish are limited in abundance, with individuals ranging in size from 5 to 9 inches.

Saugeyes were stocked at Veto up until 1997 when the program was discontinued due to too many fish being lost over the spillway.

A benefit of the spillway, though, is that it does provide some angling opportunity below the dam in the Little Hocking River. There’s some deeper holes here that will hold catfish and panfish.

Two arms extend off the main lake to the north and to the west, but those areas are relatively tough to reach, particularly in the summer. Most of the summer fishing occurs near the dam and along the south shoreline.

Shoreline access is better than average here with many areas mowed down to the water. There’s also a good system of roads that run along most parts of the lake.

“There is plenty of easily accessible and mowed shoreline for anglers to use,” Swatzel said. “There is parking at the ramp area, spillway area, and the dam. There are also smaller pull-offs near mowed shoreline access areas along the upper northeast part of the lake. These ample amounts of mowed shoreline and abundant sunfish can make Veto a good choice to take youth anglers to try their luck.”

For boating anglers, remember there is a 10-horsepower limit here. One launch, on the extreme southern end of the lake, was outfitted with a new courtesy dock in 1997. The parking lot leading to the ramp was also repaved during that project.

In the fall, wooded areas in the wildlife area are good for turkey and squirrel hunting. The Division of Wildlife’s Outdoor Skills program built an outdoor archery range here in recent years that is open to the public. It is located just below the spillway on the southeast side of the lake.

Veto Lake was impounded in the early 1950s by the damming of the Little Hocking River. It can be reached via State Highway 339 five miles north of U.S. 50 west of Belpre.

Veto has recently had major dam and spillway renovations completed. All these repairs bring Veto up to date with current Division of Water dam safety regulations. Veto Lake is also a popular kayak and canoe destination.

“The best time to fish at Veto is spring and late fall,” Swatzel said. “It is not a very deep lake and suffers from high water temperatures during the summer months. The thermocline usually sets up rather shallow (around 6 feet) so anglers should concentrate efforts in shallower water during those summer months. Fish will avoid deeper water during this time because levels of dissolved oxygen will be low in these areas.”