Keep options open on Itasca’s Pokegama: There are many 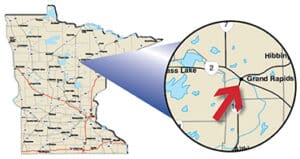 To some extent, DNR officials can often gauge how healthy a given lake is by the amount of positive or negative feedback they receive from anglers. It’s by no means scientific data, but anecdotal information can tell quite a bit about what’s going on with a lake’s various fish populations.

For Dave Weitzel, DNR Fisheries supervisor in Grand Rapids, Pokegama Lake is one of those lakes that seems to always fall into the positive-comment category.

The 6,700-acre fishery is a large, clear body of water, popular among anglers, and a fine representation of what a complete lake should look like.

“Pokegama is a great multi-species fishery that we don’t hear many complaints about,” Weitzel said. “It’s close to town, so it can be busy, but it’s a fun one to fish. You can catch anything from lake trout to largemouth bass.”

You will catch plenty of walleyes from Pokegama, too. They come in a wide range of sizes, and the potential for trophy-caliber fish exists. While Pokegama’s deep, clear water limits walleye natural reproduction, annual fingerling stocking maintains a strong population.

These walleyes grow big and fat thanks to an abundance of forage, which includes rainbow smelt, tullibees, whitefish, and perch. These greasy food options benefit all of Pokegama’s game fish populations.

Smallmouth and largemouth bass are both plentiful and good-sized, which brings a number of bass tournaments to Pokegama each year. Fish from 15 to 20 inches are quite common, and there are plenty of spots that hold both bass species.

Generally, largemouths pile up in the bays or arms of Pokegama, which are well-vegetated. Smallmouth bass tend to stick to the lake’s main lake rock or rubble, which is abundant as well.

“The lake is really known for its smallmouth bass, but both are abundant and healthy,” Powell said.

Pokegama’s panfish are numerous and respectable in size. Bluegills around 8 inches are the norm, and you will catch an occasional 9-incher. Crappies run 10 to 11 inches in length, with a few bigger fish mixed in, and you might even catch some perch worth keeping once in a while.

Weitzel says panfish reproduction is typically consistent and that those fish receive heavy angling pressure at times, especially in the winter. But Pokegama seems to keep kicking out nice panfish.

“Crappie numbers go up and down, but we sample fish over 13 inches,” he said. “Bluegills are much more numerous and are high quality at times.”

The forage base and deep, cool-water refuge opportunity contribute to building some big northern pike in Pokegama.

Powell noted that if you catch a 25-inch pike on Pokegama it might weigh over 5 pounds. He also says to look to deep water for those larger fish; they’ll be chasing smelt.

Muskies have been stocked on a low-density basis during odd-numbered years since 2007, and some of them have always been present due to Pokegama’s connection to the Mississippi River. There are no stocking plans scheduled for 2021.

“It’s more of a building population and not a destination lake for muskies,” Weitzel said.

A limited lake trout population is maintained via stocking of “carry-over” fish when available. This low-density stocking approach will continue.

“People catch a few more trout in the winter, but it’s kind of off the radar,” Weitzel said.