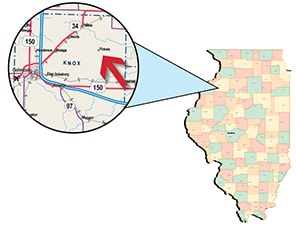 Muskies and walleyes have fared well at the relatively deep Lake McMaster, which  is situated within the 2,500 acre Snakeden Hollow State Fish & Wildlife Area.

At 165 acres, it has a maximum depth of 65 feet. The shoreline length is 7.5 miles and a centerline length of 1.4 miles. The narrow east arm of the lake has a centerline of .9 mile.

The lake was built in 1978 by Midland Coal Company as their water supply reservoir. The lake has a diverse habitat which is characterized by very deep water, shallow bars, numerous bays and points, abrupt drop-offs, islands, flooded timber and extensive shallow flats of submerged and immergent aquatic plants.

The lake was surveyed by DNR, with the following results:

• Largemouth Bass: In 2019, spring trapnetting and spring D.C. electrofishing were used to survey the fish population. The largemouth bass population was evaluated by 299 bass from electrofishing.

The largemouth bass population appears to be defined by a high percentage of fish from 4.5 to 18 inches in length with good average Relative weights. In 2017, the bass regulation for McMaster Lake was changed from a 3 fish daily harvest limit with only 1 fish greater than or equal to 15 inches, to a protected slot length limit from 14 to 18 inches with 3 fish daily harvest limit. The goal of the new bass regulation is to increase the density of the bass population from 14 to 18 inches.

Future surveys will need to evaluate further why the bass population has not started to restructure into the 14 to 18 inch size range.

The benefit to bass anglers will be more fish surviving past 15 inches to catch, and for the anglers wanting to harvest bass will be the opportunity to still harvest fish under 14 inches.

• Redear Sunfish: The redear sunfish population was sampled by 34 fish in spring trapnets and 18 fish in spring electrofishing survey. The current redear population is rated as average with the larger fish up to 9.8 inches in length. This population is of very low density and in good body condition with a Wr average of 94.

• Black Crappies: The black crappie population has had an average rating in recent years. In 2017, the crappie regulation was changed from a 5 fish daily harvest limit, to a 25 fish daily harvest limit with no more than 10 fish greater than or equal to 10 inches. The goal of the new regulation is to allow the harvest of more of the slower growing black crappie, while maintaining and promoting the population structure of crappie over 10 inches in length.

In 2019, the black crappie population was sampled by 31 fish in spring trapnets and 39 fish in the spring electrofishing survey. 69 stock size black crappie were sampled. These indices have all been steady the last 6 years with a slight rise beginning in 2017. The new regulation will be evaluated to these indices.

• Muskies: A total of 7 muskie were sampled by the spring trapnet survey in 2019. These fish ranged from 33.6 to 44.1 inches long. The body condition of these fish was low at an average. The sample was composed of 5 males and 2 females. 1 of the females had a PIT tags from a historical tagging event. She was originally tagged in 006 at a length of 37 inches and 13.5 pounds. On April 16, 2019 she was recaptured at a length of 43.7 inches long and 21.9 pounds. She grew approximately .5 inches and .65 pounds per year over those 13 years.

No muskie were stocked in 2016, 2017 or 2018. Jake Wolf hatchery stocked 136 muskie at 13.5 inches in September 2019. A triennial stocking is now scheduled to maintain a moderate density of healthy muskie.