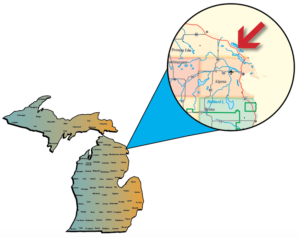 A perceived bass shortage in Presque Isle County’s Grand Lake appears to be a natural fluctuation rather than a long-term population issue.

Anglers in recent years have contacted the DNR about a apparent shortage of smallmouth bass in the 5,823-acre lake.

“DNR Fisheries Division began receiving phone calls from anglers reporting bass problems at a number of lakes in the northeastern Lower Peninsula of Michigan in 2017 and 2018,” wrote DNR senior fisheries biologist Tim Cwalinski in a report about Grand Lake following a 2019 survey of the bass and walleye fisheries. “Complaints centered around one or a combination of concerns such as reduced spawning numbers, reduced bass densities, dead bass, or ailing bass. A number of reports came from Grand Lake anglers, riparians, and even bass tournament anglers.”

“Comparisons of smallmouth bass growth over the decades demonstrates that this species grows well in Grand Lake, and growth rates have changed very little over time,” Cwalinski wrote. “Bass appeared robust during the 2019 survey, and many collected were legal size (14 inches) or larger.”

The report also indicated that 26 smallies were sent to the MSU Fish Health Lab in Lansing for viral testing. Results for viral infection and disease all came back negative.

Fisheries biologists also captures 955 walleyes during the 2019 study. Those fish ranged in length from 8 to 24 inches. The survey was conducted near the end of the walleye spawning period, which was similar to past surveys and provided accurate information for comparisons.

“Walleye growth remains below the statewide average for this species but very similar over time,” Cwalinski wrote. “This likely means that growth is dictated by lake morphology and water temperatures, rather than food supply. Catch rates of legal walleyes (15 inches and larger) have not changed when compared to the 1995 and 2004 surveys. However, catch rates of sub-legal walleyes were much higher in the recent surveys than when compared to the 1995 survey. This again is evidence of continued natural reproduction at high levels.”

Grand Lake is best known for its smallmouth, walleye and perch fisheries.

There is lots of sand, gravel, and rocks in the near-shore areas of Grand, while marl and organic matter comprise the bottom in deeper water.

Submergent and emergent aquatic vegetation is sparse throughout most of the lake with the exception of some of the shallow bays.

Grand Lake rests in southeast Presque Isle County, at the town of Presque Isle. It’s about halfway between Alpena and Rogers City and just inland from Lake Michigan. In fact, the Grand Lake outlet (also called Thompson’s Creek) in the northwest corner of the lake flows directly into Thompson Harbor of Lake Huron.

Grand Lake is a relatively shallow lake with a maximum depth of 25 feet. More than 75 percent of the lake is 15 feet deep or less.

Grand features an irregular shoreline with lots of bays. It also has 19 islands and several steep breaklines that provide abundant fish habitat.

Warren, Schaut and Schalks creeks drain into Grand Lake. Lotus Lake also drains into the lake through a small culvert. The Grand Lake Outlet flows out in the northwest corner and connects directly to Lake Huron. The lake’s water control structure is on the Grand lake Outlet.

The shoreline of Grand Lake is partially developed with private residences.

There are two public boat access sites, including a state-operated boat landing on the south shore of the lake. There is a township-owned access site off the north shore. Both offer ample parking and paved ramps.

A recent creel survey of fishermen on Grand Lake found that yellow perch comprised 85 percent of the total harvest and 88 percent of the released fish. Smallmouth bass came in a distant second, followed by walleyes and northern pike. The perch harvest was highest in February, the walleye catch peaked in June and most smallies were caught in the spring and summer.

The lake gets a fair amount of boating pressure, but is large enough to handle it, according to Cwalinski.

Bass anglers fare well when fishing early and late to avoid the boating traffic. Try working a soft plastic bait down the ledges on the west side of Grand Island. Spinnerbaits zipped over gravel bars and along the top of weedbeds also attract the smallies, as do nightcrawlers and shiners. Don’t overlook the area north of Brown Island.

For walleyes, some anglers troll crawler harnesses along the artificial reefs at the north end of the lake and off the south end of Grand Island. Jigs tipped with a crawler, leech or minnow have also produced a good bite.

Perch fishing is best in the winter. Try fishing with minnows under tip-ups, tip-downs or jig sticks in 10 to 15 feet of water along the west shore of the lake, as well as in Black Bass Bay.