The skunk: ‘Emblem of America?’ 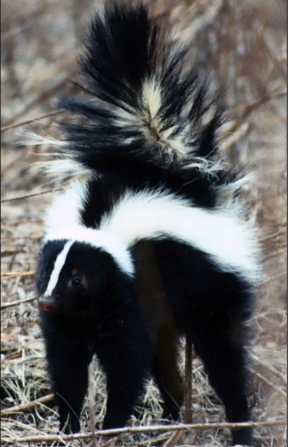 An Illinois skunk prepares to enter its “strike pose” on a winter day. Photo courtesy of DNR

It is said that the late Ernest Thompson Seton once described the skunk as the “emblem of America.” And when you think about it that statement is so true.

Despite their not so lovely aroma, skunks played a vital role in early American life. Early fur trappers valued skunk furs. Native Americans held them in high regards both spiritually and as a food source. Today, hunters and trappers find recipes and detailed instructions for cleaning skunks – and avoiding the unpleasant smell in the finished meal – from online sources.

Found in every county in Illinois, the skunk is a common creature of field edges, woodlots, cemeteries – and sometimes under the porch of a city dweller – although they are seldom seen. They mainly eat insects but will eat a wide variety of foods including fruits, vegetables, roots, small mammals, birds, amphibians, reptiles, and carrion. In large part, skunks aren’t seen as they lead a nocturnal lifestyle and are seldom out and about during daylight hours. While they are known for their striking black and white features, it is their pungent scent that leaves a lasting impression.

Why do we smell skunks more in February and into March? Mating season for skunks begins about mid-February and it could last for a month or longer. So, what does this have to do with that odor in the air?

Males wander their territories in search of willing females to mate with. If a female is not too keen on the idea and refuses to mate, she will spray, leaving a lingering scent in the countryside or even your neighborhood. If two males are fighting over a female, they, too, will spray. Therefore, if you go out to walk the dog at night and that sweet scent hits you, there just might be a skunk – or two – nearby. Some people do not find the faint scent of a skunk offensive, but the closer you are to the source, the more noxious the odor is. What about that spray? Skunks have two glands, one on each side of the anus. The glands are what produces the spray, which is a mixture of sulfur-containing chemicals, such as thiols, which have an offensive odor. Located next to the glands are muscles which allow them to spray with great accuracy, up to 10 feet. In fact, some spray may reach 20 feet. Skunks will carry just enough chemicals for five or six consecutive sprays at which point 10 days is needed to produce more.

Hopefully you never get to within 20 feet of a skunk, but what if you do? A direct hit can cause temporary blindness, nausea and vomiting. How do you know to get the heck out of there before you get blasted? Skunks will give you a few, very subtle, hints. They begin by stomping their feet and then will raise their tail, with the fur fully extended. This is when you know what is coming.

Just because you smell a skunk does not necessarily mean that one is close by. The spray is so powerful that it can be detected by the human nose up to 3½ miles away. That is if you are downwind.

Kevin Wright is an award-winning outdoor writer and wildlife photographer in central Illinois. This article originally appeared in the Outdoor Illinois Wildlife Journal.