The Stringy Lakes Chain has a diverse fishery, but don’t expect to catch trophy fish there on a regular basis. The lakes are loaded with undersized bass and fair numbers of keepers, along with good numbers and good-sized panfish. 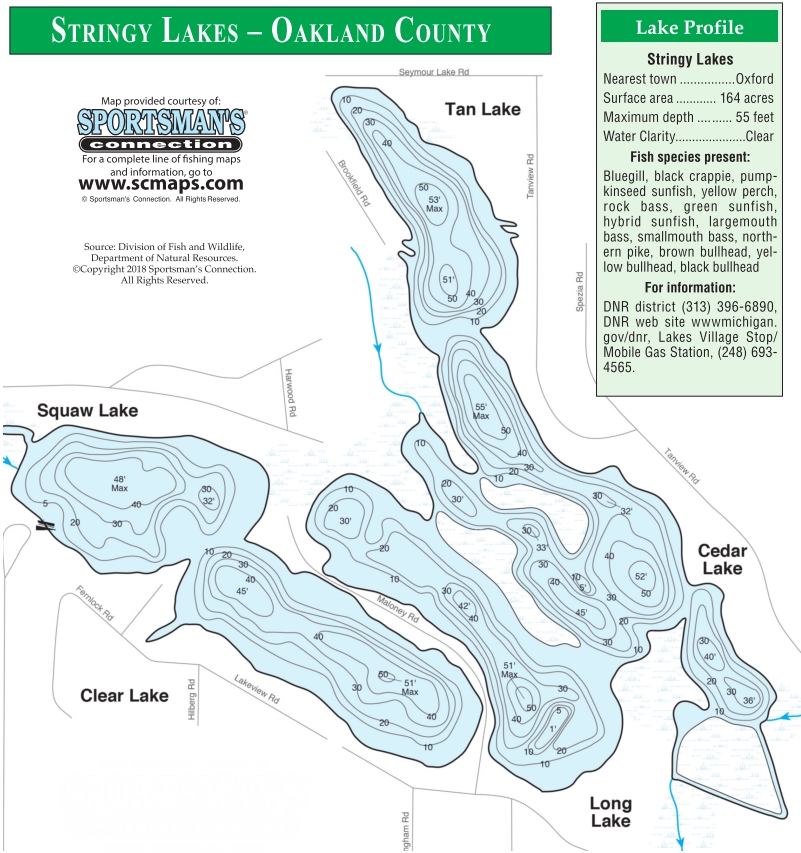 Stringy Lakes, located in Oakland County’s Oxford Township, is a chain of five small interconnected lakes. In addition to the modest fishery for panfish and bass, a few northern pike are caught by anglers each year, mostly in the winter.

Combined, the five lakes have a surface area of 164 acres. Stringy Lakes Chain includes: Squaw Lake (28 acres), Clear Lake (32.5 acres), Long Lake (34.5 acres), Cedar Lake (47 acres), and Tan Lake (22 acres). The lakes are connected by broad shallow connections, with the exception of Clear and Long lakes, which are connected by a narrow, shallow flat beneath a bridge. That flat has been restrictive in the past and access beyond that point has been limited to smaller boats.

Last summer that bridge was reconstructed and the flat beneath it dredged so access to Long, Cedar and Tan has improved dramatically.

All five lakes feature sharp drop-offs. Each lake has multiple deep basins, ranging in depth from 48 feet in Squaw Lake to 55 feet in Cedar Lake. Aquatic vegetation is abundant in all five lakes, and the local lake association kills some of the vegetation on an annual basis. The lake bottoms are composed mainly of sand and marl.

The shoreline of Squaw and Clear mostly are developed with year-around homes. Long and Cedar lakes are developed along the west and east shores, respectively. Tan is about 75-percent developed. All these homes provide lots of docks and rafts for fish to hide under. But they also produce heavy recreational boating traffic, especially on weekends.

According to DNR records, Stringy Lakes is located in the upper part of the Paint Creek sub-watershed of the Clinton River Watershed. The headwater of the tributary stream originates just north of the Oakland County border in Lapeer County. The stream flows 7.25 miles before entering Lake Michelson. Lake Michelson is connected to Tan, Long, and Squaw lakes, but culverts prevent access by boats into Lake Michelson.

There is another small inlet into the north end of Tan Lake, coming under Seymour Lake Road. There also are a number of springs that feed the lake.

There is one outlet on the south side of Cedar Lake. The unnamed stream flows through a number of lakes including Duck, Indianwood, and Lake Orion. The outlet of Lake Orion is Paint Creek.

The DNR’s most recent survey produced a total of 1,895 fish including 24 species (eight fishable species of game fish.)

Largemouth bass was the top predator species by number found in the survey. They averaged just 8 inches long, however, and only three reached the 14-inch minimum size for anglers. 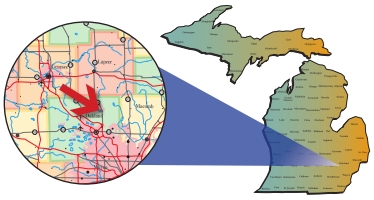 The survey also turned up three smallmouth bass, a 12-, a 13-, and a 20-incher. Light numbers of northern pike also were captured, the largest being 28 inches long.

Master Angler fish are rare in Stringy Lakes, but three have been reported since 2015 including a 22-inch largemouth caught in 2015. The other two, a 9.25-inch pumpkinseed sunfish and a 14-inch black crappie, were caught in 2017.

The are several sandy flats in the Stringy Lakes Chain that hold good numbers of rock bass and sunfish. Chunks of crawlers and leaf worms floated along the flats produce good results.

The deep hole at the south end of Cedar Lake has produced light numbers of yellow perch over the years.

Bass anglers target the docks and rafts for largemouths. Topwater presentations and crankbaits both produce, as do soft plastic presentations. The lake produces good numbers of bass, but most are undersized. The weedy bay on the west side of Cedar Lake has been known to produce a bucketmouth or two. Work the deeper water for the lunkers.

There is a DNR boat launch located on 133 acres of state-owned property on the west side of Squaw Lake. It is a gravel launch and is the only public access to the chain of lakes.