Backyard and beyond: Wildlife hunting buddies

From the Backyard Val Cunningham

Many outdoors people are familiar with ruffed grouse and the species’ affinity for small engines and solitary hunters. Randy Thome had been adopted by a grouse that flew beside him during his daily ATV rides around his property, so he wasn’t all that startled when the bird joined him during the white-tailed deer season this fall. Lucky for us, he snapped the photo you see here, showing his hunting buddy.

Birds of a different feather visited Harold Ehrenreich during deer-hunting season: a pair of chickadees that appreciated the suet and peanut butter he sets out near his deer stand. He saw one of the birds land clumsily and hop jerkily on the feeding table . A closer look revealed it was missing most of one leg. We’ll never know how this came about, but Ehrenreich says the plucky little chickadee seemed to be doing just fine.

Darlene Herbster lives near a beaver pond and she visits most days, with her camera, to see what local wildlife are doing. One day, she watched a mink hunting near shore for small fish, and two days later a family of otters splashed in the pond.

An otter came near, curious about the sound made by her camera’s shutter.

Is it a good idea to leave a box of doughnuts on the porch of your hunting cabin? Dan Sheldon’s motion camera caught a pine marten attracted to his Krispy Kremes. Bob Hilbert watched a sharp-shinned hawk rest for 45 minutes in his backyard, even as small birds mobbed it. Hilbert wonders if prey birds know when a predator is too well-fed to hunt?

Suet is popular with woodpeckers during the winter, as B.W. McEvers’ photo of a pileated shows, and late-fall sunflowers attract birds as well as squirrels in Chuck Bowman’s backyard.

Take a good look at the red-tailed hawk in Cliff Price’s photo: This young bird (yellow eyes, lack of red tail) has metal bands on both legs. It would be fascinating to know where it was banded.

And finally, D.K. Self came upon a great blue heron that may be spending the winter in the area.

Winter is an active time for nature watchers. 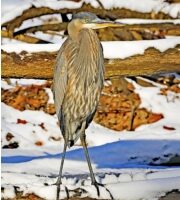 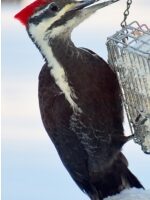 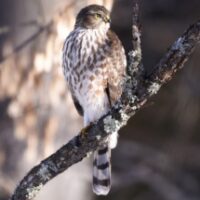 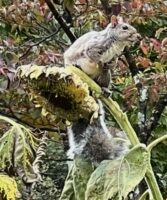 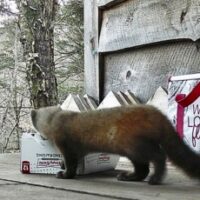 Readers: Your images are always welcome here. Send prints to the surface mail address in the box, or send digital photo jpgs to Val Cunningham’s email. See contact info below.