Editor’s Note: A winter freeze bashed the state right before Christmas, then things warmed up and rain affected ice strength, changing fishing conditions on most lakes and rivers up and down our map. The fishing reports shared here are based on information gathered during the flip-flop. Ice fishing benefited from the below-zero temperatures the last week of December. 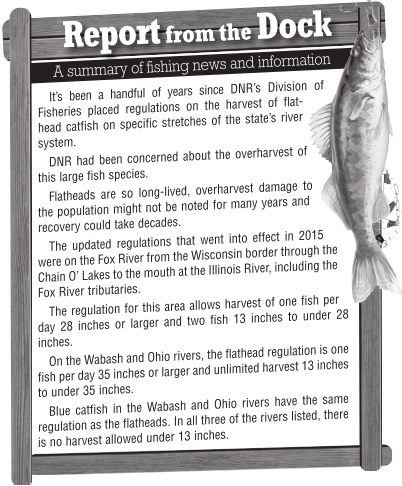 Lake Michigan: Perch are still hot on the lakefront, though slowing. The trout action in the harbors has slowed.

Areas north of Waukegan have had some good reports of fish being caught, but you need to watch the ever-changing weather conditions.

Navy Pier and the downtown harbors are slow and cold but producing some good catches of perch. The fish are ranging in size and a lot of sorting is required, but crappie rigs with fathead minnows seem to be producing the best results. Also, artificial plastics such as small minnow-style plastics rigged on double rigs and pulled along the weedbeds can produce larger fish.

Chain: Ice was still mixed with bits of open water the first week of January, but expected to form and become more solid. Meanwhile, white bass and sheepshead were caught in the 16- to 20-foot range on minnows and worms.

Keep checking with local bait shops and websites for reports as it will only take a few more days of sub-freezing temperatures to get these areas frozen over. Fishing small plastics tipped with wax worms have been a top producer in past years. Make sure you try to get a local ice report before venturing out.

Once on the lake, fishing with ice jigs under a slip-float can produce some exceptional catches this time of year. Live bait for most species is key this time of year. Floating minnows off the bottom on three-way rigs or suspended from a slip float can put some fair catches of walleyes.

Crystal Lake: This is a private lake during the summer, but during the winter ice fishermen can access the lake from the beach areas. The bluegill bite is quite good in 7 to 9 feet of water, with keepers that can be found sorting through the smaller ones. The action for pike and bass can be very good in the shallower water near the shorelines. Crappies really start biting at sundown and can be taken on minnows or small plastics fished shallow.

Crab Orchard Lake: Bass action has slowed. Bluegills are being caught on worms.

Baldwin Lake: Warm-water areas are good for catfish, though those being caught are small. Anglers are tossing crankbaits around riprap and catching a few bass. Bluegills are slow but will occasionally hit on meal worms or wax worms.

Carlyle Lake: Those who did fish over the holidays found channel cats good on the lake for anglers jig fishing with cut bait or leeches. Crappies are good below the dam.

Kinkaid Lake: Muskie action is steady. Anglers expect February to be good for muskies if temperatures hang above 30 degrees. Spinnerbaits and shallow running baits are the most effective. Catfish and bluegill action has been slow. However, bass anglers are reporting good success on spinnerbaits.

Rend Lake: Largemouth bass has been excellent using worms, black/blue jigs, minnows and spinnerbaits. Fish in shallow bays near brush cover and bushes. Fish around bridges and along the rocks.

Some bluegills and catfish being caught on live baits.

Lake Springfield: Bass are fair using plastics (worms and flukes), crankbaits and a few on swim jigs. Bluegills are fair. Channel catfish are fair to good using dip baits, liver, and cut baits in the evening.

Lake Decatur: Channel catfish are fair. Some fish are being caught on trot lines baited with cut carp and skip jack. White bass are fair. Anglers are getting some bites using Mepps in the dredging area.

Evergreen Lake: Bass are fair to slow on plastics, jigs, and spinnerbaits around submerged timber or on points. Bluegills are fair on jigs and/or wax worms. Channel catfish are fair on cut baits, dip bait, or liver in evenings. Crappies have been fair with many small fish on minnows and some on jigs around or over brush.

Mill Creek Lake: Bluegills are good, with fish hitting on wax worms, crickets, and red wigglers near weed lines, docks, or structure. Largemouth bass are fair on spinnerbaits. Early and later hours are the best.

Bluegills are fair on wax worms and nibbles. Channel catfish are fair on dip baits, cut baits and liver in evenings. Crappies have been fair on minnows with a few on jigs around and over brush.

Clinton Lake: Bluegills are good. Anglers are finding some fish in the coves and near the docks and weed lines with red wigglers or wax worms.

Largemouth bass bite has been fair off points and near shoreline stumps, and downed trees with Mepps, frogs, and swimbaits. White bass are hitting on spoons and twister tails.

Striped bass are fair at the spillway.

Lake Shelbyville: Walleyes are fair. Check out the area below the dam with spoons. Cooler weather temperatures have improved fish activity.