St. Paul — Minnesota’s legislative session is under way, and there are plenty of outdoors-related matters that have the attention of state conservation groups and agencies, as well as legislators themselves.

“We want to return to normalcy in terms of getting things done in a deliberate manner,” said Rep. Rick Hansen, DFL-South St. Paul. “We are not going to have unanimity on everything. There’s going to be disagreements, but (we’re) trying to move deliberately in getting our work done, and that means passing bills throughout the session rather than at the end of the session.”

Hansen is chair of the Environment and Natural Resources Finance and Policy committee. He said the past four years of legislative sessions have been frustrating due to inactivity concerning outdoors issues, and that he’s planning bill introductions during the early part of this session.

Conservation group and DNR leaders say certain topics that deserve attention this session include the funding via the Legislative-Citizen Commission on Natural Resources and the Outdoor Heritage Council, chronic wasting disease, invasive carp, and DNR funding. 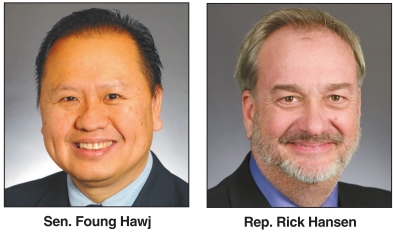 The Legislative-Citizen Commission on Minnesota Resources is made up of 17 members and provides funding recommendations to the Legislature for natural resource projects via the Environment and Natural Resources Trust Fund.

The LCCMR receives 40% of state lottery dollars, but there’s more than just funding at stake this session.

Kim Scott, government relations attorney, said the LCCMR and its funding will be one of the most important matters for the outdoors during the 2023 session.

Scott said the ENRTF will expire in 2024 and must be voted on by the people of Minnesota for it to continue. For this to happen, the Legislature must decide to create a ballot initiative for voters to renew the program.

“A high priority is to get (the current) funding bill out the door as soon as possible,” Scott said. Then, she said, legislators must focus on making sure the ENRTF becomes a ballot measure.

The Outdoor Heritage Fund includes one-third of spending via the Legacy Amendment to restore, protect, and enhance wetlands, prairies, forest, and habitat for fish, game, and wildlife in Minnesota.

Like the LCCMR, the Lessard-Sams Outdoor Heritage Council will make recommendations for the OHF to the Legislature.

Scott added that the Legislature has approved Outdoor Heritage Fund spending each year, whereas LCCMR dollars have been debated for use outside commission recommendations.

The matter of chronic wasting disease is a priority as the disease has made appearances in deer across a greater swath of Minnesota. To address the concerns of deer hunters and others, the Minnesota Conservation Federation helped create the CWD Action Coalition. This coalition includes several groups, with a focus on containing CWD and creating a moratorium on new deer farms.

“I would like to see more enforcement of rules and regulations (such as) double fencing and moratoriums – that kind of thing,” said Brad Gausman, executive director of the Minnesota Conservation Federation. “I think we’ll see movement this session for sure, based on what we’ve already heard.”

Hansen said he expects there to be a comprehensive CWD package ready “relatively soon.”

Bob Meier, a DNR assistant commissioner and agency representative at the Capitol, said that CWD deserves the attention of legislators.

Along with CWD, Gausman said the MNCF also has made preventing the spread of Asian carp a priority for the 2023 session.

Asian carp have become more prevalent in the Mississippi River, and more have been captured in recent years, as researchers look to slow their swim. Barriers long have been under consideration by the DNR and others.

The DNR’s Bob Meier said the 2022 session didn’t do much to help the DNR and its funding needs. The agency had four different funding category recommendations in 2022: capital assets (building, water accesses, etc.), a drought-related package of requests, a climate-related package, and operational investments.

While the Legislature did provide some drought funding, the other areas weren’t addressed, Meier said. He hopes that changes in 2023.

“All of our infrastructure was built in the 1950s and needs upgrades,” Meier said. “Since there’s all of this one-time (budget surplus) money, we really feel like it’s the time now. If not now, when will it ever happen, with $17 billion to spend and provide a boost … to the outdoor recreational experiences that people love in this state?”

Among the capital improvement funding the DNR sought last year (and will again this year) are $10 million for state fish hatchery upgrades, $25 million for roads and trails, and more than $65 million for buildings, bridges, and well monitoring.

The requests will change some this year, according to Meier, who said dollar figures need to increase by 10% to 15% due to inflation.

In the 2022 DNR report, the department requested $318.6 million overall, including $221.4 million in capital bonding.

Hansen said he plans to address the DNR’s funding request, and while there are several new members of the House of Representatives, he said there seems to be support throughout House.

It’s more of a question of “how much rather than what,” he said of the DNR’s budget requests.

Editor’s note: Sen. Foung Hawj, DFL-St. Paul, chair of the Senate’s Environment, Climate, and Legacy Committee, did not respond to an Outdoor News request for an interview for this story.