Most years, Michigan anglers can count on hot perch action on West Michigan’s drown river mouth lakes in the fall and winter. The big question each year: Will they be white or yellow?

Why perch from Lake Michigan migrate into West Michigan’s drowned river mouth lakes is a case of mystery and conjecture. Most likely it’s for food. The perch also probably spawn in the lakes. Drowned river mouth lakes have exceptional habitat with plenty of docks, pilings, vegetation, rock structure and slab wood from the lumbering days. 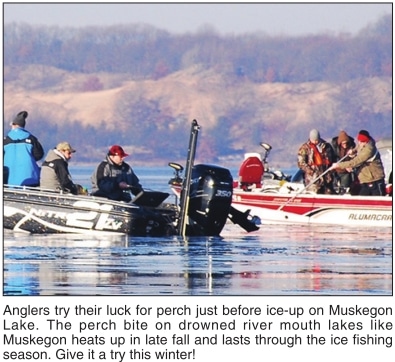 Drowned river mouth lakes like Muskegon Lake, White Lake, Pentwater Lake, and Pere Marquette Lake typically produce dependable perch action late in the fall in open water and through the ice. Muskegon Lake is one of the most consistent drowned river mouth lakes for perch. White perch typically show up right where the channel enters Muskegon Lake. From there schools show up off the Bear Lake Channel, in front of the Clipper, and off the Sand Docks. Yellowbellies can be caught in the marinas and just about anywhere you can find structure.

White Lake jumbos show up off Indian Point near the channel and push into the main lake of Long and Dowies points when safe ice forms. Consistent catches of zebra-stripped yellows are found from the 18- to 30-foot depths off the Trout Club and along South Shore Drive where you find well-defined weed lines.

The best perchin’ in Pentwater Lake is off the city marina in downtown Pentwater. The fishing can be hit or miss, but when it’s good, it’s outstanding! Access is easy, too.

In Pere Marquette Lake you’re likely to catch a mixture of yellow and white perch, some of which will top 12 inches. Try off the sand dock or Peter Copeyon Park. Wiggler or wax worms will produce the most perch, but walleye-sized minnows will produce the biggest.

Hot fishing for the Lake Michigan white perch hinges on the strength of the year-classes in recent years. Unfortunately, the 2016-2018 year-classes weren’t exceptionally strong, but even modest reproduction can produce decent fishing.

Perch from Lake Michigan are noticeably lighter in color than perch that live in the drowned river mouth lakes. Anglers routinely refer to the Lake Michigan perch as “whites” and resident perch as “yellows.” Whites also tend to be longer and skinnier compared to their resident counterparts, which obviously benefit from residing in the food-rich environs of the drowned river mouths.

A few years ago word got out around Thanksgiving that anglers were making big catches of perch on Muskegon Lake. Initially, 20 or 30 boats could be seen off the Bear Lake Channel, a known perch hangout, but the number of boats steadily grew to in excess of 100 before ice prevented boat fishing in mid-January. All and all, it was one of the best falls for white perch that any can remember and the fact that it lasted into the New Year had anglers smiling.

Once the white perch move into the drowned river mouth lakes they typically stay the winter producing consistent ice fishing, but they are migratory and can come and go.

Techniques for catching perch in the drowned river mouth lakes aren’t complicated, but there is a knack to it. I sat and watched anglers in boats next to me hauling up perch one after another while I could only get a bite on occasion. Or so I thought. I wasn’t the only one.

Most times the perch were in 30 to 60 feet of water that is just above freezing. In Muskegon Lake the water temperature was 33.5 and the perch were biting very light. So light that I found you couldn’t feel them bite unless you were rigged up properly.

Normally, a standard perch rig consisting of a bell sinker and a couple hooks on droppers was all you needed to catch a bucket of perch. The semi-dormant perch though, combined with the extreme depths, mandated that you have your hooks in-line or you couldn’t feel the bite. It also helped to hold your rod to feel the bite. A quality graphite rod didn’t hurt either.

Normally it’s obvious there are several year-classes of perch in the drowned river mouth lakes. You catch perch that are 4 inches, 7 inches, and 9 to 11 inches or bigger. Because you’re pulling the perch up from deep water they have their swim bladder coming out their mouths when they reach the surface. If given enough time, perch will re-acclimate and return to the depths, but in open water, seagulls don’t give them a chance. Many anglers catch 100 or so perch to get their limit of 25 keepers, throwing the smaller ones back. The gulls are delighted and gorging.

Anglers would be wise to keep any perch that’s big enough to fillet regardless of size, thus minimizing the waste of smaller perch.

There are commercially made rigs for perch or you can fashion your own. One of my favorites comes complete with a Krystal Flash tail, glow beads, and super sharp hooks. You can also use gold Aberdeen hooks, perch flies, or ice-fishing teardrops.

The perch didn’t seem to prefer any particular bait. I saw guys using minnows, wax worm, and spikes. I tried my secret weapon – shrimp bags – but I think they were too big of a mouthful for the frigid, less aggressive perch. I’ve made big catches of perch with plastics when the perch are more active and aggressive. It helps if the plastics are scent-enhanced.

Ice-fishing tactics for perch aren’t much different. A sensitive graph will alert you as to whether there are fish under you or not.

Roaming schools of perch come and go. Obviously, if you’re fishing out of a shanty, you’re not going to be able to use the rods you used in open water.

Slip-bobbers or sensitive spring bobbers will help you detect light-biting yellow bellies through the ice.

My ice-fishing gear is at the ready and I’m waiting for safe ice and the chance to redeem myself on West Michigan’s drowned river mouth perch!