Lansing — Michigan hunters killed a white-tailed deer on average every 0.8 seconds on the opening day of the 2022 firearms deer season.

That was just one of the nuggets DNR biologists have been able to garner from the new mandatory online deer harvest registration program. Hunters reported shooting 45,720 deer on Nov. 15, including 34,629 antlered bucks and 11,091 antlerless deer. (Ten hours and 47 minutes of legal shooting light equals 38,820 seconds. The number of seconds divided by the total number of deer registered for Nov. 15 equals one deer every 0.849 seconds.)

Chad Stewart, the DNR’s deer, elk, and moose specialist, told the state Natural Resources Commission at its November meeting in Lansing, that as of Nov. 30, the final day of the firearms season, the number of individuals purchasing either a combo license, a regular deer license, an antlerless license, or any combination of the three was 581,224, which is down about 1.2% over 2021.

“I expect that decline to continue for the next 10 years or so,” Stewart said. “It’s going to be very difficult (to maintain an adequate harvest) with declining hunter numbers.” 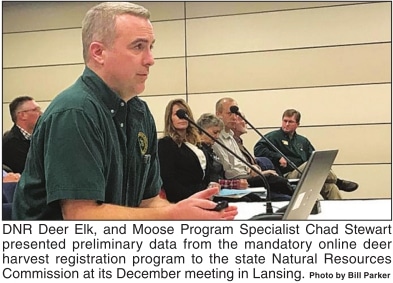 The largest segment of individuals purchasing a deer license are age 55 and above and the number of those folks who continue to purchase a license is expected to slowly dwindle.

Concerns about the amount of time it takes to register a deer online and completing the registration within the 72-hour time frame appear to be unwarranted “About 81% of hunters spent five minutes or less submitting their harvest report and about 95% of the reports were submitted within the 72-hour window,” Stewart said.

“The overall distribution is very similar to what we have had in the past,” Stewart said. “That tells us no region is being under reported. We’re seeing about what we expected.”

“At Thanksgiving one thing I am thankful for is that after Thanksgiving the antlerless harvest starts to surpass the antlered harvest,” Stewart told the commission. He said about 80% to 90% of the deer harvested in December will be antlerless deer.

The new online registration system also allows game managers to look at how the harvest is broken down by license type. As of Nov. 30, 64% of the reported harvest came from combo licenses, 22% from universal antlerless licenses, 9% from a regular deer license, 2% each from antlerless tags in DMU 487 and deer management assistance permits, and 1% from mentored youth licenses.

“The ability to track the harvest by specific licenses is something we haven’t been able to do in the past,” Stewart said.