Keuka’s ‘hole’ story: Lakers and panfish on the ice

These days, you never know if your favorite fishing spot is going to lock up during winter and offer some ice fishing opportunities. 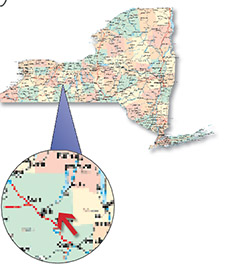 That’s the case with Keuka Lake, that Y-shaped Finger Lake that straddles Yates and Steuben counties and is capable of producing some superb open-water fishing for a variety of species.

And on those years when at least part of the big (11,584 acres) lake offers safe ice, it can draw anglers far and wide, primarily for a shot at lake trout and panfish.

“Popular spots for ice anglers include the Penn Yan arm of the lake,” says DEC Region 8 fisheries biologist Brad Hammers. “It’s generally shallower than the rest of the lake and tends to freeze on an annual basis.”

How far south that freeze extends depends on the winter, but Hammers says “most years you can count on ice as least to Keuka College. Anglers can catch a variety of species in that area, including chain pickerel, yellow perch, largemouth bass and panfish such as bluegills and pumpkinseeds.”

But in recent years lake trout, too, have been showing up and have been caught in decent numbers, presumably as they feed on the perch, based on DEC observations. Public access to that section of the lake can be found at Indian Pines Village Park, located in the village of Penn Yan. “Parking areas fill up fast on the weekends,” Hammers warns.

The Branchport arm of the lake freezes less frequently, but when it does it draws serious lake trout anglers to the hard water, where they typically vertical jig with plastics, a popular open-water tactic that can also be effective during winter. Live or dead baitfish rigs also are a go-to option.

“The last time safe ice occurred in the Branchport arm there were numerous reports of large catches of lake trout in that area,” Hammers said. Access to that section of the lake would be from the Keuka Lake State Park boat launch area.

Hammers says other species, such as pickerel, bass and panfish, can be caught in the northern section of the Branchport arm. “And if the ice is safe, there’s a small section of Keuka Lake on the southeast corner near Hammondsport in the town of Urbana,” Hammers said. “Access is from Champlain Beach Park and anglers can catch bass, panfish, and the occasional northern pike.”

Hammers says DEC earlier this year conducted several surveys at Keuka Lake, with a focus on bass, lake trout, yellow perch and various prey fish. The data is still being analyzed, but initial impressions are that the bass fishery is in excellent condition and, according to Hammers, lake trout numbers “are good, but not as high as 10-20 years ago. And based on angler reports, yellow perch seem to be what the lake trout, as well as other species, are feeding on because alewife numbers continue to be low. DEC surveys show yellow perch are supporting the bulk of the game fish population in Keuka Lake.”

Keuka Lake is one of two Finger Lakes – the other is Skaneateles Lake – with a 100% wild lake trout population.

Another interesting revelation, and one that should pique the interest of anglers, is that walleye are now being seen in Keuka Lake. DEC personnel captured close to 50 walleyes during their surveys, with fish of various year classes, an indication they are likely producing naturally. Hammers said DEC would get an occasional report in recent years from an angler who caught a walleye, but the number caught during the survey was surprising. For now, if anglers should encounter a walleye they should follow the Finger Lakes regulation of an 18-inch minimum size and three-fish daily limitCatches of brown trout and Atlantic salmon are rare these days on Keuka Lake; stocking of those fish was halted when surveys showed the lake’s alewife population was crashing.

The decline in alewife numbers also prompted DEC, in cooperation with the U.S. Geological Survey and Cornell University, to launch an experimental stocking of cisco to prop up the forage base. About 500,000 ciscoes have been stocked and early indications are that lake trout are perfectly fine with that move.

Finger Lakes regulations apply on Keuka (and other western Finger Lakes), so there’s a five-fish daily limit on the bass, with a 12-inch size minimum, through March 15. For lake trout, rainbow and brown trout, and Atlantic salmon, it’s a daily limit of five, with no more than one rainbow or three Atlantic salmon, with a 15-inch size minimum. Statewide regulations apply for all other species, notably the panfish.

And, as always, anglers should exercise extreme caution when venturing out onto the ice; at least four inches of solid, clear ice is a good guideline for safe travel. But keep in mind ice thickness can vary and be aware of areas of moving water and around docks where bubblers may be installed.