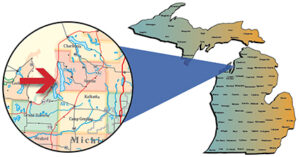 But that would be a mistake if you’re a walleye angler looking for a meal.

Located in west-central Antrim County, Birch Lake is about 2 miles north of the village of Elk Rapids. It’s just a stone’s throw from the north end of Elk Lake and about 2 miles west of Torch Lake. With these larger lakes in such near proximity, boating pressure remains relatively light on Birch Lake.

The public boat ramp, which is located at the north end of the lake, is not conducive to large boats. It features a gravel ramp and parking for up to five vehicles. The access site is located off Briarwood Drive.

Birch Lake has a surface area of 326 acres and has a maximum depth of 50 feet. A large portion of the lake is 20 feet deep or more.

There are no inlets to Birch Lake, but there is one small unnamed outlet that connects Birch Lake to Lake Michigan.

The shoreline of Birch Lake is moderately developed with homes and cottages.

“While Birch Lake is only moderately developed along its shoreline, efforts should be made to protect remaining riparian wetlands from development in order to maintain the healthy aquatic ecosystem that currently exists,” DNR Fisheries Biologist Heather Hettinger wrote in a summary of a 2021 survey of the fishery in Birch Lake. “This can be achieved by reviewing Department of Environment, Great Lakes, and Energy (EGLE) permit applications and working with the Birch Lake Association.”

Over the years largemouth and smallmouth bass, northern pike, walleyes, yellow perch, and bluegills were stocked in Birch Lake. Historically it was a pretty good panfish lake, but in the 1990s anglers started to catch a lot of stunted panfish.

Between 1998 and 2001, the DNR stocked more than 78,000 walleyes in Birch Lake. The walleye population has thrived ever since, and now produces a self-sustaining walleye fishery. Panfish populations also are faring well.

During a survey of the lake in 2021, DNR fisheries biologists caught 755 fish representing 13 species.

A total of 71 walleyes representing six year-classes were collected in the survey.

The walleyes ranged between 4 and 21 inches.

The survey found decent numbers of northern pike up to 38 inches long, along with five rainbow trout between 8 and 23 inches. Only the 23-inch rainbow was aged.

“The trout was age 4 and most likely entered the lake through its outlet looking to spawn in the spring,” Hettinger wrote.

A look at DNR Master Angler program statistics reveals limited numbers of entries from Birch Lake. Between 2015 and 2019, the last year for which the DNR website has statistics on Master Angler entries, only two fish meeting minimum standards were entered: a 21.5-inch smallmouth bass caught in 2018 and a 14.38-inch yellow perch caught in 2017.

Birch is a typical northern Michigan lake and has a lot of rock bass. It also has decent numbers of black crappies, bluegills, and yellow perch. It’s a pretty good bass lake, and anglers report that they catch fair numbers of northern pike, too.

To dial in on the walleye bite many anglers fish at night and cast suspending crankbaits along the first drop-off.

Walleyes also are caught during daylight hours by anglers trolling bottom bouncers with crawler harnesses in deeper water, up to 35 feet.

Anglers also target smallmouth bass in Birch. They catch a lot of 2- and 3-pound fish and occasionally fish up to 4  and 5 pounds are brought to the net.

Bass anglers have good success when casting spinnerbaits, tubebaits, or crankbaits along the sandy drop-offs.

Pike fishing is best in the spring when the fish are fond of spinnerbaits and large shiners or chubs suspended under a big bobber.

Panfish are caught year-round and will hit waxies and spikes through the ice.