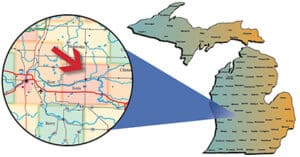 Long Lake in Ionia County is well known by the locals, but is a bit of a sleeper for anglers outside the Grand Rapids area. If you’re looking for a hot panfish bite, Long Lake is one of the best panfish lakes in the area.

A quick glance at the DNR’s Master Angler entries confirms that claim.

While trophy panfish are available, the growth rate for most panfish species in Long Lake remains below the state average. Still, good numbers and occasional trophy-sized fish inhabit the lake.

Located in northern Ionia County, about six miles east of the city of Belding, Long Lake offers anglers 365 acres of surface water. The lake has a large, weedy shoal area along the north shore, and a sandbar that runs down the middle of the lake.

There are steep breaklines along the south shore that drop down to the lake’s maximum depth of 57 feet. There’s also a hole northeast of the sandbar that dips down to 21 feet.

The bottom of Long Lake is a mixture of marl, peat, muck, sand, and small amounts of gravel. Most of the shoreline is developed with year-round or seasonal residences. The northeastern corner of the lake rests within the Flat River State Game Area, although lake access there would be through swamp land.

Invasive Eurasian watermilfoil was identified in Long Lake in 1998, and in 2011 the presence of starry stonewort was confirmed. Both have been kept at bay through a variety of herbicides and algaecides, which is regulated by the Aquatic Nuisance Control Section of the Michigan Department of Environment, Great Lakes, and Energy.

“The focus of these treatments has been suppression of invasive species and control of filamentous algae to improve recreational opportunities,” wrote DNR Fisheries Biologist Addie Dutton in a summary of the most recent survey of the fishery in Long Lake.

Management of Long Lake has a deep history dating back to 1891 when the Michigan Fish Commission first surveyed the lake. Long has been surveyed a dozen times since,  and the surveys continue to produce good results as far as abundance of fish and health of the fishery.

The DNR stocked channel catfish in Long Lake in the late 1980s and early ’90s in an effort to crop off some of the smaller panfish and produce a fishery with larger panfish. Currently no stocking is taking place on Long Lake.

In the most recent survey of the status of the fishery, DNR personnel captured 1,837 fish representing 20 species.

Bluegill and sunfish were the most abundant game fish species found in the survey. Bluegills ranged between 1 and 8.2 inches but averaged just 4 inches in length. Eight year-classes were present, however. Pumpkinseeds ranged from 1 to 8.9 inches and averaged 5.4. Seven year classes were present.

“The diversity of panfish in Long Lake provides anglers with the opportunity to catch numerous species,” Dutton wrote.

Northern pike and largemouth bass are the most abundant predator species in Long Lake and both were found in good numbers.

Panfish anglers concentrate their efforts along the weeds on the edge of the sand bar in the middle of the lake. Wax worms, crickets, and leaf worms are deadly for ’gills and sunnies while the specs are fond of small minnows.

The cove in the northeast corner of the lake also provides good panfish action.

For bass, try running soft plastics, topwater baits, or spinnerbaits along the weeds in the northeast cove, or along the drop-offs adjacent to the sandbar. Early in the mornings, try topwater baits, rubber worms, or live crawlers, leeches, or minnows around the docks and rafts that dot the shoreline.

Pike anglers fare well when fishing with livebait. Concentrate on the weeds closest to the two deepest holes in the lake.

Public access is available through a state-owned boating access site on the south shore off West Long Lake Road. The site features a gravel-surfaced ramp with one skid pier, an outhouse, and parking for 19 vehicles with trailers.