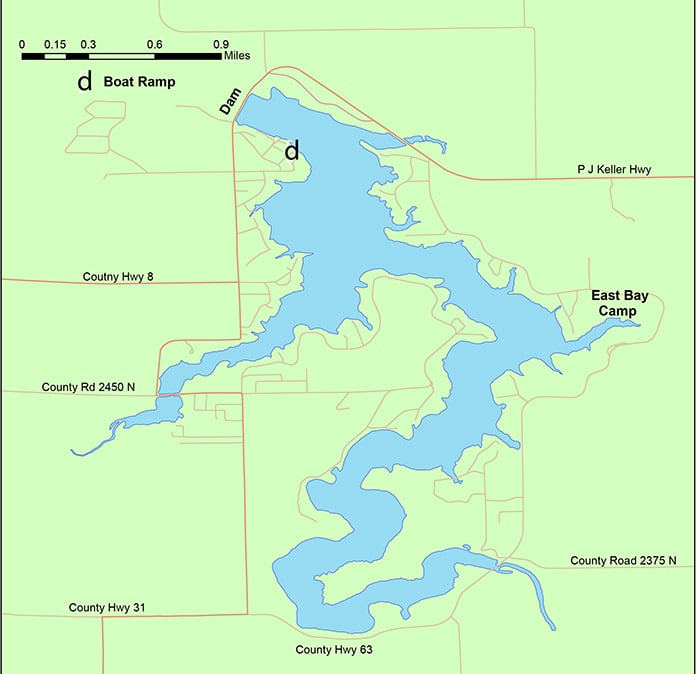 A 71⁄4-pound largemouth bass caught during a fishing tournament on Lake Bloomington last summer seemed to recharge anglers’ enthusiasm for the species – and for the lake.

We will have to wait a few months to see if an even larger bass was weighed in on the McLean County water this summer, but anecdotes shared by anglers point to even more good news on the bass front.

What we can report is that during the 11 DNR-sanctioned tournaments on Bloomington in 2021, a total of 314 largemouths were weighed in. Aside from the 71⁄4-pounder, a 6.6-pounder was also recorded, along with a handful that came in right around the 5-pound mark.

The 635-acre reservoir has 18½ miles of shoreline. It is owned by the City of Bloomington.

There is one public boat launch and there is a fee to use the ramp and lake.

The following information is a summary of DNR’s most recent fish population surveys of the lake:

• Largemouth/smallmouth bass: DNR’s sampling resulted in a catch rate of 103.8 bass per hour. The management objective is 100 bass per hour.

“The bass fishery is average but the future looks promising,” DNR noted in its report on Bloomington. “Even though smallmouth bass have been in the lake since it was impounded, the fishery is not strong. A smallmouth bass stocking program was started in 2009 in an attempt to improve the fishery.”

• Walleyes – Walleyes were first stocked into this lake in 1984 and has received approximately 25,000 2-inch walleyes every year.

The most recent electrofishing survey for walleye resulted in 34.3 walleye per hour of sampling. The average catch rate for the past 18 surveys is 38.6 walleye per hour.

Walleyes collected during the most recent survey ranged in size from 8 inches to 24 inches.

In the spring of 2019, nets were used to collect walleyes and 4.4 walleye per net were collected. The average catch rate is 3.7 per net.

“The walleye regulation was changed in 2017 to an 18-inch minimum length limit and a three fish per day harvest limit,” DNR reminded anglers.

“The objective is to collect 25 per hour for each species,” DNR noted.

The black crappies ranged in size from 7 inches to 10½ inches and the largest black crappie collected weighed 0.6 pounds.

The white crappies ranged in size from 7 inches to 14 inches and the largest white crappie weighed 1.37 pounds.