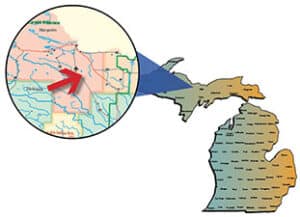 Walleyes and panfish are thriving in Marquette County’s Little Lake due mostly to walleye stocking efforts by the DNR Fisheries Division.

Early in the 21st century the DNR was stocking between 40,000 and 47,000 spring fingerling walleyes in Little Lake every other year in an effort to produce a viable fishery and to crop off yellow perch and white suckers, which had overpopulated the lake in the 1980s and ’90s.

Since 2011 that effort has been reduced from 88 to 100 spring fingerlings per acre down to about 30 per acre, or about 13,900 every other year. The hope was to reach a balance between maintaining a robust walleye fishery without over-cropping the panfish.

That management objective is the result of a 2011 survey of the fishery in Little Lake, which found a healthy fishery comprised of 18 species of fish, but perhaps a few too many predators.

The DNR reports that limited natural reproduction of walleyes had been documented in Little Lake, but not enough to sustain a recreational fishery. By finding a balance between reproduction and stocking, biologists are trying to keep anglers happy with a healthy and diverse fishery.

Little Lake is part of the Escanaba River watershed and sits on the outskirts of the Escanaba State Forest. The Little Lake State Forest Campground is on the east end of the lake, providing camping opportunities and boating and fishing access. The access site is off Little Shag Lake Road and features a paved ramp and parking for up to six vehicles.

A small canal flows into the southwest corner of Little Lake from Mehl Lake, and an unnamed creek flows in from the northeast. Sawmill Creek flows out of the lake to the south and eventually drains into the Escanaba River.

The shoreline of Little Lake is mostly developed and most of the shoal area is sand and organic material with scattered patches of gravel.

There’s very little woody debris in Little Lake and the main vegetation is the beds of Potamogeton that emerge when warm weather arrives. There is a fair amount of submerged logs and brush, especially at the west end of Little Lake, near the entrance of the creek from Mehl Lake.

Management of the lake began back in 1925 and has included stocks of bluegills, bass, perch, brook trout, and walleyes over the years.

Manual removal of suckers and stunted yellow perch occurred in 1982, ’84 and ’85. Walleyes were planted on a regular basis after that to maintain control of the suckers and perch.

No plants occurred in the lake between 2011 and 2014 due to concern over viral hemorrhagic septicemia infesting the hatcheries. Stocking resumed in 2015 on an every-other-year basis.

Recent Master Angler catches indicate that the lake’s panfish are doing well with the reduced walleye stocks. Between 2016 and 2019, the last year the DNR’s website lists Master Angler fish, 14 bluegills or pumpkinseed sunfish caught in Little Lake were entered in the program. That includes four ’gills (between 10 and 10.25 inches) and three sunnies (between 9 and 9.68 inches) caught in 2018 and 2019.

Light numbers of northern pike were captured in the survey and the size structure appears strong. It included multiple age classes. Northerns averaged 25.6, ranged up to 37, and 73% were legal sized (24 inches or more.)

Good numbers of walleyes also were collected. They averaged a tad over 15 inches and ranged up to 23. The survey also found light numbers of smallmouth bass up to 18 inches.

Little Lake is divided into two basins by a point extending into the lake from the south shore and creating what the locals refer to as “The Narrows.” The east end is relatively shallow and fishing is usually slow. Light numbers of pike and panfish are found in the deeper pockets. The best fishing in this part of the lake is in the spring.

West of the second island out from the launch, through The Narrows and in the basin west of there, is where the best fishing occurs.

Walleye anglers like to troll crankbaits at night through the breaklines that extend out of The Narrows. Crawler harnesses and jigs tipped with crawlers or leeches also take some dandy ’eyes from this area of the lake.

Pike anglers target the breaklines in the west basin with smelt fished under a large bobber.

Perch, bluegills, and sunfish are scattered throughout the western end of the lake and will hit leaf worms, minnows, and wigglers fished under a slip-bobber or drifted on a single hook.