DeRuyter Reservoir, a 557-acre waterbody that straddles Madison and Onondaga counties, has a storied history, having been built back in the 1860s to supply water to the Erie Canal. 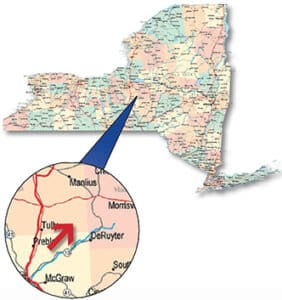 Ultimately, it was decided that it was insufficient in doing so, but these days it serves as a fine fishing spot, and its shoreline is heavily developed with homes and cabins.

There is no state boat launch on the reservoir (there is a fee launch at the DeRuyter Lake General Store at its south end, as well as shore access from a dam at the north end owned by the New York State Canal Corp.). But despite those minor access challenges, DEC has over the years stocked walleye in the reservoir and established a pretty good fishery to complement the largemouth bass and panfish opportunities.

“Anglers who know what they’re doing can catch walleye in DeRuyter,” said DEC Region senior aquatic biologist Jim Everard, “and every once in a while it seems like someone will catch a really nice one while ice fishing. It’s managed under statewide regulations now for walleye – a 15-inch size minimum and five fish daily – after having a special 18-inch, three-fish limit for several years.”

DeRuyter Reservoir has historically been stocked at various times by the DEC, which planted walleye fry from 1935-1990 and again from 2001-12, as well as by the Tioughnioga Lake Preservation Foundation, which took over stocking in 2013 as part of a unique “top-down” milfoil control effort whereby predator fish control panfish populations, which allows for more milfoil-eating insect activity.

That costly effort was ultimately shelved after several years, and DEC resumed stocking in 2021. This year 1.7 million fry were planted in the reservoir, which sees “very limited or no” natural reproduction, Everard says.

But the reservoir is known for more than walleye. And, in fact, largemouth bass and panfish may be the main attractions to DeRuyter. While the water doesn’t yield many lunkers, the bucketmouths are available in quantity.

“I really don’t know why there aren’t more large fish in there,” says Everard. “But it’s not unusual for most Madison County waters. There’s not a lot of 18-inch plus bass, but if you wanna have a fun day of bass fishing it’s a good spot to go to, with a lot of fish in the 12- to 16-inch range.”

DeRuyter also holds smallmouth bass, but if you encounter a bronzeback consider it a bonus incidental catch.

What you will almost assuredly connect with while fishing for largemouths is chain pickerel. The toothy pike wannabes are so abundant bass anglers may want to consider a wire leader to avoid losing an expensive bass lure or two.

One pretty good rule of thumb for anglers fishing a new water is whether the fisheries biologist fishes it and what they target. Everard visits DeRuyter Reservoir with some regularity – for panfish, specifically bluegills and pumpkinseeds.

“Our surveys have turned up quite a few bluegill and pumpkinseeds over eight inches, which is a decent one in New York state,” he said. “And there are quite a few black crappie on the borderline of eight inches. The crappie often suspend out over deeper water and can be tough to locate. They’re a little easier to figure out in the spring. And during the ice fishing season a lot of anglers head out for them after dark.”

The panfish lineup also includes rock bass and yellow perch, and the perch get plenty of angling attention during the hard-water season, which usually occurs on DeRuyter. “Most of the Madison County waters tend to freeze up a little earlier than others in the area,” said Everard, noting the higher elevation of waters in that county.

With a heavily developed shoreline of homes and camps, expect a fair amount of recreational boat traffic during the summer. That’s not necessarily a huge issue, since most anglers fish early and late, before or after the jet ski and other activity.

DeRuyter Reservoir is managed these days entirely by statewide fishing regulations, and there are no horsepower limitations on the water.

DeRuyter Reservoir is located in westernmost Madison County, and the water actually slices into Onondaga County just north of the Cortland County border. Route 13 out of the village of DeRuyter will take you to Middle Lake Road (County Route 55), and a right turn onto Route 98 will take you to the general store and boat launch.