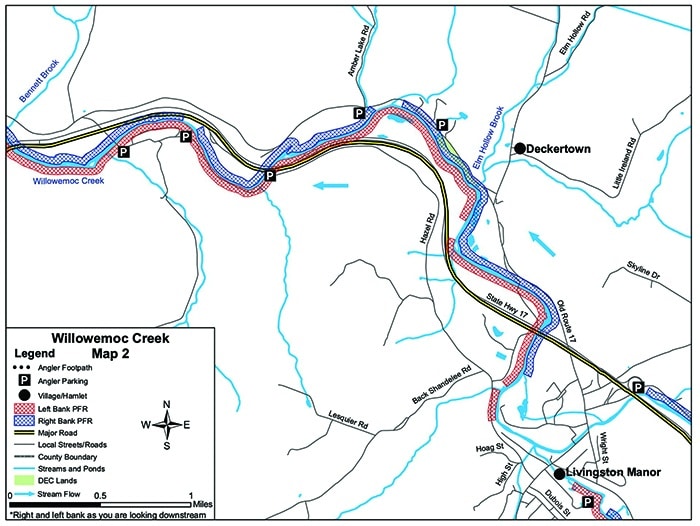 Casting into history on the famed Willowemoc

A fishing outing on the famed Willowemoc Creek in the Catskills is much more than just time on the water. It’s a pilgrimage of sorts, not unlike a round of golf at St. Andrews in Scotland or watching a Yankees game at the old stadium.

You’ll be casting into history on this water, especially as it converges with the storied waters of the Beaver Kill at Roscoe and flows on to Livingston Manor. No further proof of that is needed when you see the Catskill Fly Fishing Center and Museum situated along the Willowemoc. The various pools have well-known names, notably Junction Pool where the Willowemoc flows into the Beaver Kill, and several historical markers located along the “Beamoc” commemorate the legendary anglers who cast their lines on waters where fly-fishing began.

Chances are pretty good you’ll be joined by other anglers, but with 27 miles of water there’s plenty of room for everyone, with fishing pressure gradually decreasing the further upstream you go, where trout are not stocked but good numbers of wild brook trout can be found.

“It’s one of the most heavily fished streams in southeastern New York,” says DEC Region 3 fisheries biologist Michael DiSarno, “and you’ll likely see anglers here throughout the year. And we’ve also had reports of anglers taking advantage of the new catch-and-release season (from Oct. 16-March 31).”

These days, the Willowemoc is classified by the DEC as a “stocked-extended” water from its confluence with the Beaver Kill upstream to the Parkston Road bridge, and also from the downstream end of the Willowemoc Wild Forest upstream to its confluence with Fir Brook. As a result of the Stocked-Extended designation, the Willowemoc receives four stockings of trout in the spring, starting in the third week of April. “About 3,500 yearling and 390 two-year-old brown trout are stocked during each increment,” DiSarno said. “Wild trout can also be found throughout the creek but are more abundant in the upstream reaches.”

Within the Stocked-Extended stretch, there is a catch-and-release section from the second Route 17 Quickway Bridge east of Roscoe (dubbed “Trout Town, USA”) upstream 3.5 miles to 1,200 feet upstream of the Willowemoc’s confluence with Elm Hollow Brook. DiSarno says the C&R reg “has been around for a long time” and is better shown on DEC’s interactive map (dec.ny.gov/outdoor/122444.html).

In addition to its historical significance, fly fishers flock to the Willowemoc and Beaver Kill to test their skills casting to trout that have plenty of feeding options in the form of numerous insects and hatches. It can make for challenging, sometimes frustrating fishing trying to determine exactly what bug the fish are keyed on, given the multiple options often on the water.

In the early season, the Willowemoc sees Red Quills, Quill Gordons, Hendricksons, and Early Brown Stoneflies, followed in May by March Browns, Light Cahills, Green Drakes. Green Caddis, Gray Fox, and Brown Drakes. In mid-June some Golden Drakes appear, and from mid-July into September it’s typically a Trico and Tan Caddis game, as well as terrestrial patterns such as grasshoppers, beetles, and the oft-overlooked ants. Streamer patterns can tempt some of the stream’s larger brown trout as well.

Size of the fly, too, often dictates whether the trout will accept your artificial offering.

DiSarno says water temperatures can become a factor in the summer, notably as the Willowemoc approaches the Beaver Kill, and anglers should avoid stressing the fish when water temps approach 70 degrees.

Locating the Willowemoc is pretty simple – head east on Route 17 (west if you’re coming from the New York City area, which scores of anglers do) to Livingston Manor where the stream enters the Beaver Kill. Debruce Road to the northeast parallels the stream; not surprisingly, it then turns into Willowemoc Road. The Willowemoc Wild Forest stretch can be reached by turning right onto Pole Road.

When you’re done plying the famed waters of the Beamoc, it’s well worth getting a history lesson by stopping off at the Catskill Fly Fishing Center and Museum (cffcm.com), which was just one of the stops for the New York State Outdoor Writers Association who visited near Roscoe and Livingston Manor earlier this year.