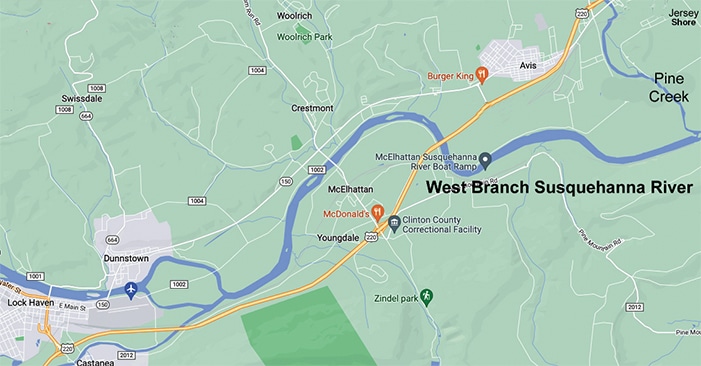 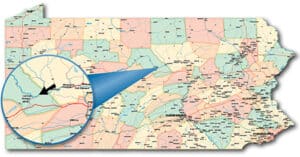 Cutting a swath across the northern section of Pennsylvania, the West Branch of the Susquehanna River acts somewhat like a special border between the regions of the state.

This western section of river is still bothered by pollution leftover from factories and mines, but it is much better than it used to be thanks to the efforts of many.

While some of the western portion still lacks when it comes to huge populations of fish, which simply is not the case between the towns of Lock Haven and Jersey Shore.

Here a multitude of species call the river home, and regardless of whether you fish from the bank, wade in the waters, or use some sort of watercraft to get around the river, you are going to enjoy the action.

There is a small park located just to the East of Constitution Bridge that serves as a good spot to start your trip for a first-timer. It will put you close of the water and you have your choice of how to approach it best.

There are a few paths to the water’s edge, worn down by previous anglers that literally point you to a starting spot.

From here you can fish the stretch between the bridge and Great Island, a section that will provide good action for a variety of species at this time of the year.

Among the more populous will be smallmouth bass, rock bass, channel catfish and carp.

The water clarity can change, depending upon the weather, but normally it is fairly clear. This can be deceiving to those wading, as the depth won’t look to be too much, until that step finds you in water deeper than your waders are made for.

Also the bottom is a mix of rock and mud, with the latter possibly being a foot or two deep. You may not be in too deep of water, until you start sinking in to the mucky bottom, so be prepared for such occasions.

Use a good pair of polarized glasses to aid you in seeing fish. This still might not be enough in the current, as the rippling water can aid in hiding fish near the bottom.

Regardless of how you are fishing, fan cast the area before moving to possibly hook up with active fish.

Also be ready for a quick lure or bait change when you encounter different species. My last trip there found me fishing a small jig for bass and panfish when I encountered a large school of carp.

A quick snip of the line and a hook tied on baited with a nightcrawler found me quickly hooked up to one of those fish. I wish I could say it was a good battle won by me, but the fish rubbed the line against something on the bottom and broke off.

Still if I had not been prepared for such a quick change, I many never have had the opportunity.

One key thing I have learned from this section of river is that during the summer months, wherever there is a juncture of streams, no matter how small, it seems to be a hotspot.

The mixing water temperatures can be an attraction for certain species, and I have caught a few nice trout over the years at such places.

I never pass on these areas and you should not either. They seem to always be productive.

There are many current breaks in the river. Rocks and other bottom debris provide some but there are also islands and bridges that form others.

These are always hotspots, normally on the downstream side. If there is debris pile around a bridge, that makes it all the better.

One other thing to look for in the river is tires. Though discarded and ugly to some, these become home to many fish species.

Channel catfish in particular have taken a liking to them. They use them as daytime cover and spawning areas during June.

If you encounter a tire on the bottom, by all means drop a bait or lure into the center to see what your luck may be.

As the towns of Lock Haven and Jersey Shore are in close proximity to one another, you can expect to share the water with other anglers.

Don’t worry because there is plenty of elbow room for all to enjoy.

With the popularity of kayaks exploding the last few years, this stretch of water is used heavily for short floating trips on the river.

Weekends in particular see heavy traffic on the river, with boaters and tubers adding to the mix.

With easy access from Interstate 80 and Route 220, this stretch of the river is easy to get to.

In the midst of populated areas, this region will serve the visiting angler well with all of their needs for an extended stay.

Don’t miss out on the action that thousands drive by each day, get on this section of the river and enjoy.

WHAT YOU SHOULD KNOW: Between Lock Haven and Jersey Shore a multitude of species call the river home. Whether fishing from the bank, wading or using watercraft to get around, you are going to enjoy the action.

One thing to look for in the river is tires. Though discarded and ugly to some, these become home to many fish. Drop a bait or lure into the center and try your luck.