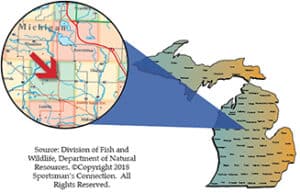 Last year the DNR planted 13,398 spring fingerling walleyes in Budd while in 2019 the DNR released 350, 11-inch muskies. This double effort has created bountiful prospects on the 175-acre lake.

Budd Lake is located in central Clare County in the town of Harrison. In fact, it splits the town in half.

Because of its proximity to a relatively populated area, and its reputation as a pretty good lake to fish, it receives a fair amount of both recreational boating traffic and sportfishing pressure.

The most recent netting survey of the lake turned up a dozen species of gamefish.

Bluegill was the most abundant species found in the DNR survey. Of the 292 ’gills that were collected, one-third of them were over 6 inches in length, which is what the DNR considers “desirable” size for anglers.

The nets also captured a fair number of largemouth bass up to 19 inches and a couple smallies in the 19-inch range.

Since bass tend not to net well, those numbers are probably a little under what’s really in there, according to the DNR.

The survey also turned up northern muskie to 48 inches, a couple immature northern pike, rock bass to 11 inches, walleye to 25 inches, and yellow perch to 11.

Budd Lake has given up a handful of Master Angler-sized fish in recent years including a 14-inch black crappie and a 10.5-inch bluegill in 2019 and a 45-inch muskie in 2018.

Largemouth bass virus (LMBV) was found in Budd Lake in 2003, and anglers are still urged to take precautions so they don’t spread the virus to other lakes. Those precautions include: thoroughly clean your boat, trailer, and other equipment before fishing on another lake; don’t transfer fish from Budd Lake to another lake;  handle bass gently and release them quickly if you choose to release them; minimize targeting bass between mid-July and mid-August, especially during exceptionally hot weather; and report dead or dying adult largemouth bass to the DNR.

In recent years the muskie fishery has attracted anglers to Budd Lake. The action begins as soon as the season opens on the last Saturday in April.

Artificial lures like bucktail spinners and Believers attract muskies. Troll them at a pretty good clip along the weedbeds in the southwest corner of the lake between Main and Elm streets. The cove on the east shore, just north of the island, is another spot worth checking out. If the artificials fail to entice a bite, switch to a live-bait rig and thread a big sucker or shiner onto your hook. Drift this along the same weed edges and be prepared for some fierce, frantic action.

These same areas also hold northern pike, so don’t be surprised if you reel one in. If you’re targeting pike don’t overlook a twin-bladed spinnerbait or an ol’ reliable Dardevle.

If it’s bass you’re after, Budd Lake serves up a pretty good fishery, despite the finding of LMBV, which is not known to infect humans.

The shoreline of Budd Lake is mostly developed and there are a lot of docks and rafts, which offer some good spots to start looking for bass.

Try flipping a jig-n-pig or a jighead tipped with a rubber skirt up under the docks and rafts. Weedless jigs pitched into lily pads will also pull bass out of the heavy cover.

If you prefer fishing the open water, target the weedlines and breaks with a purple crawler or live crawler. Topwater baits like Jitterbugs and Pop-Rs work best early in the morning and right around sunset.

Panfish anglers congregate around the ample weedbeds, especially those in 8 to 20 feet of water. The drop-off along Hillcrest Road at the northeast end of the lake can produce decent panfish action in the summer and winter.

There is a public access at the south end of the lake off Grant Avenue, on the west shore at the end of Beech Street, and at the north end of the lake at Wilson State Park. The state park has 160 campsites if you’re looking for a combo camping/fishing trip.