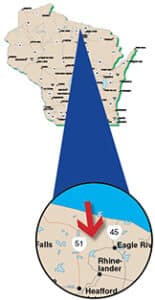 Besides providing anglers a variety of game fish and panfish to chase for more than 100 years, Plum Lake’s more-or-less linear shape, 141⁄2 miles of shoreline and numerous points and bays offer anglers plenty of places to continue fishing if a good blow arises. Plum also is known for its abundant structure in the form of rock and gravel bars and humps, some of which are capable of snagging a lower unit if the boat operator isn’t paying attention.

During five days of walleye fyke (trap) netting, the DNR crew captured and fin-clipped 532 adult fish, which were released after being “scienced,” which includes, measuring, sexing and scale samples for aging at a later time. The crew then sampled the population again using electro-fishing boats and gear, capturing 222 adult walleyes. By comparing the number of fin-clipped walleyes from the fyke nets to the number of fish showing new fin clips, the crew can come up with a population estimate.

During the electrofishing run, 18% (39 of the 222 walleyes) wore the fin clip applied during their visit to the fyke net. Based on those results, Plum Lake was estimated to contain 2,710 adult walleyes, or 2.6 per acre. An estimated 68% of adult the adult walleyes were 15 inches or longer. The largest walleye was a 26.7-inch female. The bulk of the captured walleyes measured 14 to 19 inches.

Plum’s walleye regulation allows for a three-fish daily bag limit. There is no minimum length limit, but walleyes from 14 to 18 inches may not be kept. The regulation does allow one walleye longer than 18 inches in the daily bag.

Although muskies were not targeted during the netting or electro-fishing surveys, the crew did handle 12 adults and one juvenile fish. Of the adult muskies, 17% (two of the 12) were 40 inches or longer, with the biggest fish being a 44.3-inch female. They also caught a 37-, 38- and 42-incher.

The crew used one night of electro-fishing sampling on June 3 to look at smallmouth bass and largemouth bass. Nighttime electro-fishing is used more often than netting to sample bass populations because bass typically aren’t in the shallows at ice-out when the DNR crews use nets to capture walleyes, northern pike and muskies. However, the bass are often up in the shallows at night in late May and early June. That night the crew captured 124 smallmouth bass. Of that number, 122 were considered adults that were at least 8 inches or longer and 73% were 14 inches or longer. A good number of those fish were 17 inches or longer, with the 18-inchers making up the biggest chunk of any size range. The longest smallie measured 21.7 inches.

The adult largemouth sample came in at a lower population density than did the smallmouths – just 1.8 adults per mile of shoreline.

Plum Lake has had a reputation for growing a healthy number of small pike and that history showed in this survey, with the bulk of the pike ranging from 16 to 22 inches. That’s not all bad, though. If anyone is looking for a place to introduce kids to tip-up fishing during the winter, those kids will stay warm and wear their legs out chasing pike flags on Plum Lake. Ice fishermen who have a good pickling recipe in their pocket also hit Plum Lake pretty hard to build up a supply of fillets for the pickling jar.