Historically, Beatons Lake in western Gogebic County has been known as a very good trout lake. Splake, rainbow trout, and lake trout have been stocked into the 330-acre lake over the years and that effort produced a thriving recreational fishery. 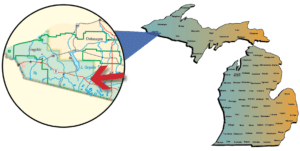 During the past 20 years or so anglers have noticed the trout fishery dwindling. A 2018 survey of the status of the fishery in Beatons may provide clues as to why: Northern pike and rainbow smelt now call the wilderness lake home.

“The presence of northern pike and rainbow smelt is a challenging find in the Beatons Lake fishery,” wrote Senior Fisheries Management Biologist George Madison in a summary of the 2018 survey. “These two species of fish are a problem with trout management, as the rainbow smelt graze on the same zooplankton supply that the rainbow trout are dependent on, and the northern pike will prey on the trout fishery.

“Trout are stocked during the month of May, which is the same time when northern pike are in the shallow shoal waters seeking their spawning habitats. The stocking of 6- to 9-inch soft-fin trout in nearshore waters occupied by pike will result in unacceptable levels of predation on the hatchery fish. Northern pike numbers may continue to increase over time, whereby they will diminish the success and annual carry-over of any stocked trout.”

Because of this new finding, the DNR decided to curtail all stocking of fingerling and yearling splake and rainbow trout in Beatons Lake for a trial period between 2019-2025.

Rainbow trout and lake trout have been stocked in Beatons Lake since 1937 and splake since 1963.

In more recent years, the last time splake were stocked in Beatons was 2016 when 5,000 fingerlings were released. The last rainbow stock was 2018 when 5,400 were released.

The most recent stock of lake trout was in 2019 when 200 lakers averaging 28 inches were released.

Madison wrote that 7,200 adult rainbow smelt were stocked into Beatons in 1975.

“…but these fish were only caught in incidental numbers (possibly due to survey timing or gear type) in following surveys (10 in 1979, 2 in 1986, 12 in 1993), and there were no reports of smelt being caught by anglers. The one rainbow smelt captured in 2008 has now evolved into tens of thousands of rainbow smelt in the 2018 survey, to the point that the fyke nets were hard to pull from the water.”

The first occurrence of northern pike in Beatons Lake was in the winter of 2016, when two 12-inch northerns were caught through the ice by a local resident.

Northern pike had not been documented in any of the previous DNR surveys.

Beatons Lake is located in western Gogebic County about 12 miles northwest of the town of Watersmeet. It features 330 acres of surface area and reaches a maximum depth of 90 feet.

The lake has no inlet and one outlet that forms the headwaters of Two Mile Creek, which flows into the Cisco Branch of the Ontonagon River.

Beatons doesn’t produce a ton of trophy fish, but there are a lot of keepers in the lake. The only relatively recent Master Angler award was presented for a 29.75-inch splake caught in 2006.

Beatons is a Class B trout lake, which means trout fishing is open all year. The daily possession limit is five trout, but no more than three can be 15 inches or over. The minimum size limit is 12 inches for rainbows and splake and 15 inches for lakers.

Fly fishermen still move into the lake as soon as the season opens and take light numbers of trout throughout the lake When the bug hatches are coming up, the fly fishermen do best.

Winter anglers also take good numbers of fish on Beatons. Jigs tipped with small minnows or wax worms are productive for panfish. Some anglers also catch fish on tip-ups. Ice anglers do pretty well along the drops in front of the public access site.

That access site is run by the U.S. Forest Service and is located at the north end of the lake off Federal Forest Road 5156. It features a gravel ramp suitable for medium-sized and smaller boats. There is parking for 10 vehicles.

Primitive camping is available at the nearby Ottawa National Forest, and there are some developed campgrounds nearby as well.