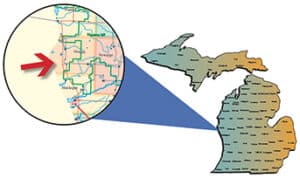 Stony Lake, in Oceana County, is a typical drowned rivermouth lake in that it features a good population of warmwater species and fair runs of Great Lakes trout. Stony also has a thriving population of rough fish.

Fair weather anglers generally target panfish, bass, and walleye, while in the spring and fall a small but dedicated contingent of anglers shows up at the lake to match wits with steelhead and brown trout.

A designated trout stream, Stony Creek enters Stony Lake at the northeast corner and exits to the southwest. It drains into Lake Michigan about a mile downstream.

“Stony Lake is a drowned rivermouth lake and its water level is directly influenced by the Lake Michigan water level, which has been near or above historically high levels for the past few years,” Tonello wrote. “There is a lowhead dam just below the outlet of Stony Lake, but for the past few years with high Lake Michigan water levels, the dam has been inundated. Under lower water conditions, the dam may serve as a fish passage barrier for non-jumping species such as round goby or white sucker, but with the high water levels the dam does not serve as a barrier.”

There are a couple of unnamed creeks that flow into Stony Lake from the north. The outflow to Lake Michigan is the lone outlet.

Stony Lake is long and narrow, featuring 276 acres of surface water and a maximum depth of 43 feet. There are several points, a couple bays, and a half-dozen small holes ranging from 30 to 43 feet deep.

The drop-offs are steep and close to shore, except at the extreme east end, but they are topped by a shallow, weedy shelf that circles most of the lake.

There is some drowned timber along the south shore of the lake, which creates decent fish habitat. The east end is the weedy end of the lake and has the most gradual drop-offs. The west end has steeper, rocky, breaklines.

The shoreline of Stony Lake is mostly developed with year-round homes and summer cottages.

Stony Lake has not been heavily managed by the DNR. The state stocked about 63,000 lake trout in 2001, but nothing since. The lake maintains a balanced fishery without the DNR stocking any fish.

In that last survey of the lake, DNR nets turned up lots of gamefish including brown trout and steelhead, largemouth and smallmouth bass, rock bass, bluegills, pumpkinseed sunfish, black crappies, walleyes, and a few yellow perch.

The walleyes are thought to have migrated up Stony Creek from Lake Michigan since they have never been planted in the lake.

Spearers and bow fishers dial in on the lake’s rough fish population, especially in the spring.

A quick look at the Master Angler awards given out for fish taken on Stony Lake backs the notion of good rough fish action.

For the best panfish bite, anglers target the weedy, east end of the lake. Fish crickets and wax worms along the

weeds for bluegills and try a minnow for crappies. There is some sunken timber along the south shore. Find it and you’ll likely be into some slab crappies.

Pike fishing heats up in the winter and anglers set tip-ups along weeds and drop-offs at the east end of the lake.

Bass anglers catch fish with topwater baits and tubebaits fished around the docks and rafts early and late in the day.

A public fishing pier at the west end of the lake provides good shore fishing opportunities.

There is a public access site on the southeast end of the lake off Stony Lake Road. A steep hill leading into the launch site makes launching and loading of large boats a little tricky.