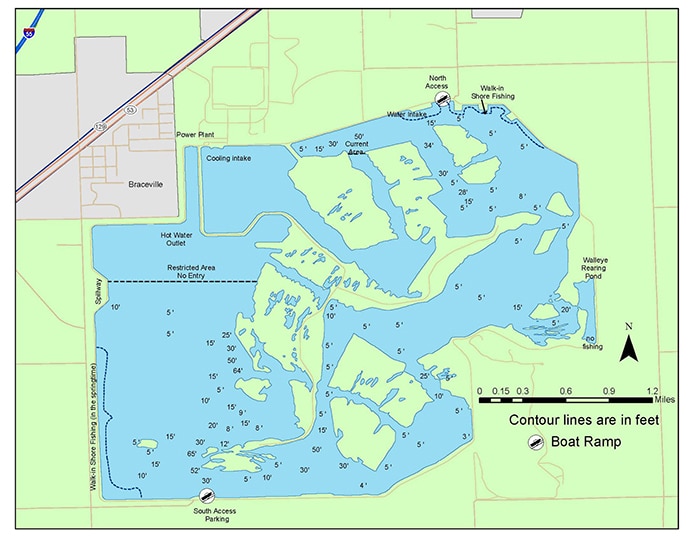 An annual rite of sorts, Braidwood Lake opened for the season on March 1. The highly-anticipated opening was a little different this year, with anglers uncertain how COVID restrictions would affect fishing at the 2,241-acre lake in southern Will County.

One thing is certain: the fishing at Braidwood remains solid.

Braidwood’s blue catfish get a lot of attention, but its largemouth bass fishery is just as popular. DNR’s most recent survey of the lake revealed that 26% of the largemouths were over 15 inches and all size groups had good body condition.

During the 11 fishing tournaments held on Braidwood in 2020, a number of bass over 4 pounds were caught, with the largest weighing in at 5.3 pounds.

“For a couple years, hybrid stripers were not stocked due to a decline in the shad forage base,” DNR Fisheries Biologist Seth Love explained. “As these stockings continue, barring another shad decline, we are hopeful that abundances will increase.”

Located just south of the Village of Braidwood, adjacent to U.S. Route 53, Braidwood Lake is a partially perched cooling lake. When impounded in 1981, several old strip-mine pits were flooded within the lake proper.

A majority of the shoreline is open to bank fishing, and these areas are clearly marked. Access to the interior islands by anglers is prohibited. Steep drop-offs, rock piles, man-made habitat, current and thermal breaks and woody cover are all present.

As for the fish in Braidwood,  following are noted from DNR’s most recent survey of the lake:

• Largemouth bass: After declining to a 10-year low in 2013, the largemouth bass collection had shown steady improvement. That changed slightly in 2019 as the total number of largemouth bass which were collected declined, although catch rates and the number of quality size bass exceeded the long term averages.

Bass smaller than 8 inches accounted for 45.8% of the total collected, which is very close to what was observed in the 2017 survey. Bass that were larger than 8 inches declined but remained higher than the long-term average.

“The density of smaller bass is largely due to the annual stocking program which, during 2018 and 2019, contributed a total of nearly 86,000 fingerlings to the population,” DNR noted. “Less than desirable recruitment resulted in a decline in the density of quality size bass.

• Hybrid striped bass: The hybrid striped bass stocking program began in 2011 and with the exception of 2013, fingerlings were stocked annually to 2016. Due to declining shad numbers, stocking ceased until the forage base showed improvement. Once this occurred the stocking program was reinstated and in 2019 Braidwood Lake received multiple stockings: 25,815 fingerlings from the state hatchery system, and from Exelon’s Quad Cities hatchery 9,378 fingerlings, and 180 ten-inch fish.

The few that were collected in the 2019 fall survey were cohorts from the releases earlier that same year, as well as survivors from past stockings.

The 2019 survey results fell short from the previous survey, as a total of 35 blue catfish were collected ranging from 8.3 inches to 30.3  inches at an average length of 17.4 inches.

• Channel catfish: A combination of very successful natural reproduction and high survival of young fish leads to a population dominated by smaller fish. Channel catfish collected in the 2019 survey ranged from 5 inches to 28 inches and 14 pounds. As it has been for the past several years, the average size channel cat in Braidwood is just over 12 inches and ½-pound.

• Bluegills: Found throughout the lake, bluegills are more commonly collected in or near rip-rapped shorelines. Larger fish seem to be in decline, as the average size bluegill in the 2019 survey was 5 inches. Bluegills larger than 7 inches are generally uncommon in fall surveys but are occasionally caught by anglers.

Braidwood Lake is maintained by periodically pumping water from the Kankakee River. As a result, the lake supports a variety of fish species which include common carp, quillback, freshwater drum and others.

Braidwood is supported by a thriving gizzard and threadfin shad forage base as well as various other minnow species.

Swimming, wading, water skiing and sail boating are prohibited. Braidwood Lake is open to fishing daily from 6 a.m. till sunset from March 1 until 10 days prior to the opening of the waterfowl season (central zone).