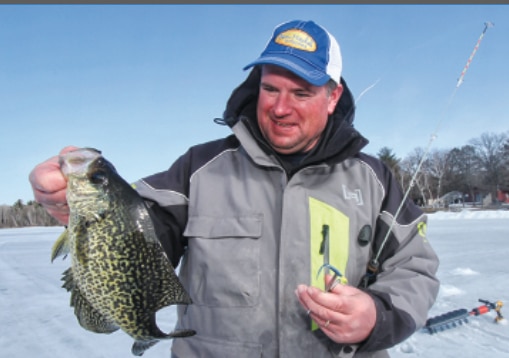 On many lakes, particularly those with clear water that allows for lush stands of aquatic vegetation, crappie fishing at early ice is about finding the best weeds.

Tall, green vegetation will typically hold crappies at early ice, and may do so well into the winter. The weedline can vary from lake to lake, but lakes that have good stands of weeds out to 14 feet of water often offer a definite pattern. In some lakes, milfoil might be the prominent tall weed. Other lakes have stands of narrow leaf pondweeds and cabbage. Coontail can be excellent, as well, especially on sharp breaks.

Typically, these weed locations are big, sometimes stretching 100 yards or more, but there will be sweet spots within the weeds. Not all the weeds will be as dense, for example, or as tall. Find where the weeds are densest. They will recharge with fish continuously.

Finding the big spot can be relatively easy, but it pays to spend time locating a specific spot. There are many ways to find the best locations within these weedbeds. At times, especially during early ice, you can see weeds frozen into the ice. Underwater cameras can be extremely useful. Your sonar can also be used to find the tallest, thickest weeds in a spot. Sometimes, you can physically look down a hole and see the vegetation.

Tony Mariotti, from the Detroit Lakes area in Minnesota, brought up a great point on a recent podcast when he described how he finds these locations in the fall, from a boat. Tony explained that many of the best cabbage locations on a lake are some of the best muskie-fishing spots. If you are serious about finding these locations, nothing is easier or faster than using a boat in the fall.

Typically, the tallest and best weeds are green, but not always. Cabbage and pondweed break down fairly quickly and turn yellow or brown. By using an underwater camera, I’ve found a lot of fish around yellow or brown weeds. As long as the weeds are still standing tall and there is ample oxygen – which is pretty typical at early ice – crappies might be in weeds that are dying. I would simply argue that green weeds have the ability to hold fish much longer into winter.

Crappies love cover, and tall, dense weeds offer that cover. During the day, especially with sun and clear skies, crappies often drop down into the weeds. Low light and clouds might create windows during which these fish cruise the open lanes and the outside or inside edges next to the weeds. Low light might mean you can sit in one hole and wait for fish traffic. Sunshine might mean you need to run and gun and really drill out a spot and drop the presentation in front of fish that aren’t moving much.

Nothing beats a large-profile tungsten jig paired with a soft plastic for these weed crappies. The added bulk and profile can be seen farther away, which can lure fish up and out of the weeds. The added bulk also enables you to punch through the weeds to reach pockets below the top canopy.

To be fair, spoons and horizontal swim lures will catch fish, too, but when you have a treble hook on the presentation, you snag a lot more of the green stuff when you’re trying to get down past the tallest stalks of the weeds.

Low power and “weed” modes on your electronics are invaluable for fishing weeds. You need to lower the power dramatically to tune out most of the weeds that cause clutter on your screen or dial. This enables you to see the open gaps between stalks and beneath the canopy. This also enables you to see fish move through these open gaps.

To explain this, imagine you have a series of orange and yellow marks that rise 10 feet off the bottom that indicate weeds. Imagine that there are three gaps that are a 1 to 2 feet within the marks, indicating openings within the weeds. You can see your lure or fish in the open gaps.

What an analog or broadband signal enables you to do is see fish where there are lines indicating weeds because the signal will flutter and often change color to a stronger signal. You can actually look into the weeds much better because the unit is picking up movement.

Underwater cameras can also be useful – not only for finding weeds but for getting a detailed picture of weeds and how fish are relating to them. Also look for cloudier water. If parts of the weedbed seem hazier and the visibility is greatly reduced, fish that spot. I have found that fish moving around in the weeds often create that haze.

I learned a long time ago that you never say always or never when fishing, but for finding crappies, a general rule of thumb is that the big crappies will be in the thick stuff during the day. Pike and bass often drive the panfish into hiding. The bigger panfish often seem to pick the best locations and the smaller fish get pushed out. If you’re finding small bluegills in the area where you’re fishing, keep exploring and find the spots within the area where there are thicker taller weeds.

There will often be clouds of small bluegills, for example, just hanging around these weed locations, but the slabs are ruling the roost – occupying the absolute best hiding spots. If there aren’t pike, bass, or muskies patrolling this weed spot, that dynamic can change, but predators have a big influence on panfish location on many lakes.

On most lakes, as winter progresses crappies will pull out of the weeds and suspend over basins or holes during the middle of winter. If we get a mild winter where we don’t see a lot of ice or snow, weeds will remain up and green longer and will continue to hold fish. Thick stands of tall weeds, however, are always  great starting points on many lakes across the Midwest at early ice.