Cook’s Pike has lots of ’eyes, smallies – and some pike 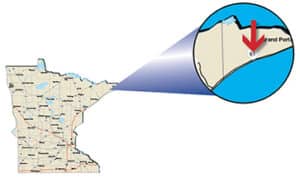 Getting to Cook County’s Pike Lake involves a long stretch of narrow, winding road. Meet another vehicle heading the opposite direction and you might have to be a bit creative to get around one another.

But this proverbial road less traveled offers great rewards. Located about 10 miles west of Grand Marais, Pike Lake is a solid walleye and smallmouth bass fishery with a few bonus fish species in the mix.

The DNR conducted a creel and lake survey of Pike Lake in 2019. Its walleye population reflected strong numbers and a wide range of sizes – 16 different year-classes to be exact, which included fish as old as 24 years.

The walleyes were all naturally produced fish that tend to grow slowly. But based on information gathered from anglers during the creel survey, walleyes harvested averaged 18 inches in length, and there were a lot of bigger fish released.

A quarter of the walleyes sampled in the survey were 16 inches or longer, and there are two strong year-classes – 2015 and 2017 – on the horizon.

The walleyes of the 2017 year-class are now about 13 inches in length, while the 2015 fish are somewhere around 15 inches long. In short, the current and future status of Pike Lake’s walleye population looks healthy.

It takes about four years for a Pike Lake walleye to reach 12 inches, and six or seven years to reach 17 inches. They tend to grow slower now than in the past, which could be attributed to a couple of factors.

Pike was once known as an excellent perch lake that kicked out numbers of keeping-size fish. That population has declined over the years, so natural forage for walleyes is limited.

A growing smallmouth bass population and the lake’s northern pike also compete with the walleyes for the forage that remains.

“We’re not sure what happened with the perch, but it used to be a destination perch lake as recently as 15 years ago,” Persons said. “The best working theory is that the lake is now infested with rusty crayfish and the vegetation is disappearing.”

While those crayfish are likely chewing up ideal perch habitat, they’ve also provided a premium forage base for the lake’s smallmouth bass. Pike Lake has a fine reputation for its abundant and large smallmouths.

Good numbers of 14- to 17-inch bass are caught here, along with the occasional bigger fish, and there are plenty of shorter fish in the pipeline. Last year’s creel information showed that the number of anglers fishing Pike strictly for smallies is on the rise, too.

“They gorge on those crayfish so their growth rate is fairly fast,” Persons said. “Pike has an excellent, high-quality smallmouth bass population. It’s one of our better smallmouth lakes.”

Persons says they tend be incidental catches, “but if you tie into one, it will make your day.”

You might also catch an incidental brook trout. A single fish was sampled in 2019, which likely entered the lake from its outlet Murmur Creek or the Pike Creek inlet. Both are designated trout streams with brook trout.

“I suppose they get in there,” Persons said. “It wouldn’t be shocking if one was caught.”